A Story of a Miracle Baby
Guest Post by: Melinda Lynn Cote

When I found out I was pregnant I was 6 weeks along. We were very thrilled. I was already starting to show so therefore went to the doctor to see if we were having multiples, after 2 ultrasounds we were, twins.

A few weeks later something wasn’t right. I went to the hospital and we had lost a baby. To the doctors amazement the other baby was okay and growing well. Months had past when we got to see our little peanut again although we didn’t know if we were having a boy or a girl, no one could tell.

When I was 23 weeks along things happened again like it did after losing Baby Twin A. We went to the hospital, things were fine the doctor said. 3 weeks later I had some contractions at 26 weeks. My blood pressure had sky rocketed and I was diagonsoed with Pre Exclampsia. I was rushed to the IWK in Halifax hoping to hold off delivering our baby for a few more days. After 4 iv’s and 4 different medications things came back to norml and I was placed in the hospital on bedrest until baby was to be born.

A week had passed and just when we thought all was well it wasn’t. My blood pressure had skyrocketed to 200/116 within hours. After 24 hours off numerous attempts to get it down Nothing worked and Myself and Baby were in jeopardy of losing our lives. An emergency c section was given and our Little Girl Piper Lee-Anne Lynn was born on March 6th 2011 weighing 1 pound 11.5 ounces at 27 weeks gestation. 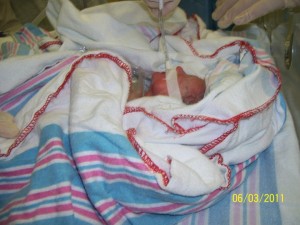 Piper was placed on a ventilator for 5 minutes after she was born. After that she was breathing on her own which again amazed everyone who had contact with her. Everyday she got stronger and stronger and after spending 10 weeks in the NICU she was able to come home. It was the day after Mother’s Day, what a present for a first time mom to bring our little Preemie home.

She now weighs over 10 pounds and still amazes us considering she was a twin and what she had to go through to get to where she is today. She is our Miracle. The Angels were watching over her and continue to do so. We are forever grateful to the IWK staff and all our family and friends for all the support they gave us. But most importantly we are forever grateful to Have our Piper.

Thank you to Melinda for sharing her story with us. Tomorrow is Piper’s 6 Month Birthday. Happy 6 Month’s to Piper.

Do you have a story you wish to share? You might just touch someone else’s life that has a similar experience to yours.

Submissions are accepted via my email. They are reviewed and you will receive an email if your story is selected to be published on my website.