COS COB, CT (August 2014) – Chicken Soup for the Soul®, the world’s favorite and most recognized storyteller, joins the fight for healthy eating with a new PBS show, which premieres on PBS stations beginning August 9, 2014 (check
local listings). CHICKEN SOUP FOR THE SOUL: FOOD & FAMILY, a co-production of Georgia Public Broadcasting Media and Chicken Soup for the Soul Productions, shows that how we eat is as important as what we eat. 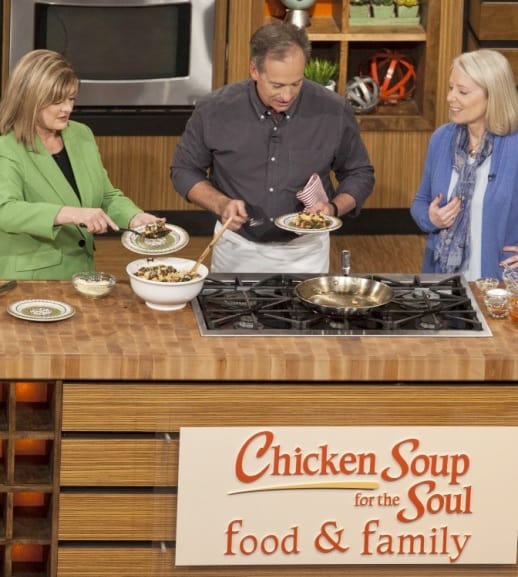 Among the topics covered in the show are:

• The importance of gathering people together around the
table for healthy meals
• Tools and tips for how to do this
• How and why cooking can be fun and stress-free
• Inspiring stories about how shared meals have changed
lives
• How to stock the pantry so you are always prepared
• Cooking demonstrations that feature one-pan, easy-to-prepare great-tasting meals
• The scientific and medical evidence that eating home-cooked meals together at home is a
necessity, not a luxury

CHICKEN SOUP FOR THE SOUL: FOOD AND FAMILY brings a new perspective to the national debate about healthy eating and the obesity crisis by pointing out that how you eat is as important as what you eat. The show provides insights through science and stories illustrating that meals together are where we create family traditions, learn and connect, socialize and gain confidence. The hosts provide personal insights and offer demonstrations of terrific, easy-to make recipes that will inspire viewers to try them out at home. We also learn that the traditions we create around the table can be part of a powerful legacy that can be gifted to others. The hosts dispel the myth that it’s too much work to bring people together around the table for healthy meals. Viewers will learn that preparing food and eating at home doesn’t need to be complicated or expensive – and it is well worth it!

CHICKEN SOUP FOR THE SOUL: FOOD & FAMILY will premiere on PBS stations across the country beginning August 8, 2014 (check local listings) or contact your local PBS station.

Amy Newmark, publisher and editor-in-chief and author of the Chicken Soup for the Soul series, including Chicken Soup For The Soul: Food and Love, has been a writer, speaker, financial analyst and business executive in the worlds of finance and telecommunications for over thirty years. As publisher of the Chicken Soup for the Soul book series, she has edited or co-authored the last 100+ books, has a weekly syndicated column through the Hearst Corporation and a weekly column on SheKnows.com with over 40 million unique visitors a month. Amy is also a regular guest on radio and television shows around the country.

Catherine Cassidy, editor-in-chief of Taste of Home, which publishes the largest food magazine in the U.S. with a paid circulation of over 2.5 million, oversees the development of two national print and digital cooking magazines, a large cookbook publishing program, more than four-dozen newsstand specials and tasteofhome.com, which currently has over 14 million unique visitors a month. She regularly appears on QVC and does national TV and radio promotion for the brand. Every year since 2011, she has been named one of the 50 Most Powerful People in Food. Prior to her current position, Cassidy was editor-in-chief of Prevention, the nation’s largest health publication.

John Doherty was the executive chef of the Waldorf-Astoria Hotel in New York City for 23 years and author of the first major cookbook from the famed hotel. “Chef John” created and served dinners to both American presidents and the heads of European countries. He has been a featured chef on the public television series At The Chef’s Table and on The TODAY Show, and has made appearances on The Food Network and A&E. Doherty, who has spoken passionately
about the relationship between food preparation and emotional investment is now the chef for the Chicken Soup for the Soul food line, playing an integral role in the creation of products that make it easier to bring people together around the table for healthy meals.

Suzanne Koven, MD, a primary care internist, is board-certified in internal medicine, and practices at Massachusetts General Hospital. She received her B.A. in English literature from Yale, her M.D. from Johns Hopkins, and holds an M.F.A. in nonfiction from the Bennington Writing Seminars. After her residency training at Johns Hopkins Hospital she joined the faculty of Harvard Medical School and has practiced primary care internal medicine at Massachusetts General Hospital in Boston for over 20 years, with special clinical interests in obesity medicine.

Her column “In Practice” appears monthly in The Boston Globe, and her writing has appeared in publications including The New Yorker.com, The New England Journal of Medicine, Psychology Today and on NPR. She is also the co-author of the book, Chicken Soup for the Soul: Say Hello
to a Better Body.

About Chicken Soup for the Soul

Chicken Soup for the Soul publishes the famous Chicken Soup for the Soul book series. In 2007, USA Today named Chicken Soup for the Soul one of the five most memorable books in the last quarter-century. With over 100 million books sold to date in the U.S. and Canada alone, more than 250 titles, and translations into more than 40 languages, “chicken soup for the soul” is one of the world’s best-known phrases and is regularly referenced in pop culture. Today, 20 years after it first began sharing happiness, inspiration and wellness through its books, Chicken Soup for the Soul continues to delight readers and fans with new titles, but has also evolved beyond
the bookstore. Its high quality products include wholesome and balanced pet food that recognizes the unique relationship between pets and people, a line of delicious, nutritious food, that makes it
easier to bring people together around the table for healthy meals, as well as movies, television, licensed gifts, and a host of digital offerings, all of which are inspired by stories. Chicken Soup for the Soul is “changing the world one story at a time®.”

As one of the largest PBS stations in the nation, Georgia Public Broadcasting (GPB Media) has been creating content worth sharing for over 50 years. With nine television stations, 19 radio stations and a multi-faceted web presence, GPB strives to educate, entertain and enrich the lives of its viewers and listeners with programming that includes statewide radio news, current affairs, high school sports, educational resources for teachers and students and enlightening programs about the state.