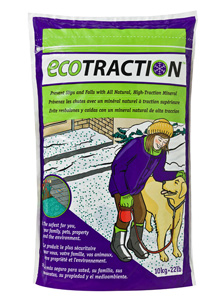 Today we have the chance to help support an awesome and GREEN product while entering to win tickets to this Sunday’s Argos game! Fans of planet earth and the CFL rejoice!

EcoTraction is an environmentally-friendly alternative to road salt that helps to reduce tire slippage. Unlike traditional road salt, which can destroy cars (and boots!) and contains harmful chemicals that leach into our soil and groundwater, EcoTraction is made from all-natural volcanic material and is very safe for animals. In fact, EcoTraction was started after the co-founder lost his eight-year-old cocker spaniel to lymphoma caused by road salts. Despite the dangers, Canada and the US still use a staggering 20 million tons of road salt per year, and EcoTraction is looking to do everything in its power to help change that.

Dragons’ Den has selected EcoTraction as one of their top green companies that have been featured on the show, and they’re holding a contest to determine which company is a “game changer.” Official voting has closed, but the number of “likes” on each video still matter, and EcoTraction needs your help! Here’s the link to the video – click through to give it a quick “like”: http://www.cbc.ca/dragonsden/gamechanger/ecotraction.html

As an added incentive, EcoTraction is giving away a pair of tickets to this Sunday’s Argos game. Tickets are in the lower section near the 30-yard line – great seats! To support a growing green technology company and enter to win tickets to the game, “like” the Dragons’ Den video and let us know in the Rafflecopter entry form that you have. We’ll be selecting a winner on Saturday morning, so enter quickly and spread the word!