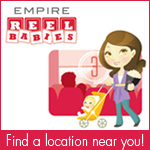 Does it seem like all you have been watching is children’s television and movies? Are the songs stuck in your head top hits for your baby? If this is sounding all too familiar, then maybe you need to catch a movie that you would love. Wondering what you will do with your little one when you are taking in a movie for you? How about bringing them along to a baby friendly environment. That is right, this really does exist and it is called Empire Reel Babies.

Twice a month, you can see a new release ‘grown-up’ movie in a baby-friendly environment. Empire Reel Babies keeps the lights on dim, and they lower the volume so you can watch the film while caring for your little one. Each Reel Babies auditorium is equipped with a change table, bottle warmer, play mat, exersaucer and baby swing so you can care for your baby without missing a single minute of the movie.

If you follow me on Facebook and/or Twitter then you have seen me running giveaways for coupons for free admission to an Empire Reel Babies movie. You have also probably seen me mention that February has been bring a friend free month for Empire Reel Babies shows.

Click on the Province below to find a participating Empire Theatre near you.

Empire Reel Babies members help vote on which movies will be shown. You can have your say too. Just register for Reel Babies, verify your account and start voting.

Disclosure – I am participating in the Empire Reel Babies program by Mom Central Canada on behalf of Empire Theatres. I received compensation as a thank you for my participation. The opinions on this blog are my own.