I was just at the rink the other day joking with other parents that hockey is my life and if I get cut I bleed hockey sticks and pucks. 🙂 We really are a hockey family right from our baby who is now 8 years old and up. We are players, managers, coaches…..just about every role in hockey you can think of.

One hockey company that my family loves is Grit. We have a Grit bag for every player in our house and that is because Grit keeps every player in mind and makes a bag to suit every need.

If you follow me regularly, then you have probably seen my review of the Grit Hockey Pod, Grit HYSE hockey tower, and the Grit 33 inch HTSE hockey tower.

Now I want to tell you about the Grit 36 inch HTSE Hockey Tower…..

First, check out my video from the review of the Grit 33 inch Hockey Tower as they are essentially the same bag, just one bigger than the other.

The large HTSE gives you 3 inches more room than the smaller HTSE. The extra room actually provides a lot of room for bigger gear. I would say that the 35 inch HTSE is meant for adults. My gear fits with extra room in the HTSE 36 inch and I am 5 foot 8 inches, so there is a ton of room for the larger players to get their gear into the hockey tower. My Little One who is 8 years old and 54 inches tall can climb right into the HTSE 36 inch bag so that tells you how big an area you get.

Here is my Little One standing next to the 36 inch Grit HTSE Hockey Tower. 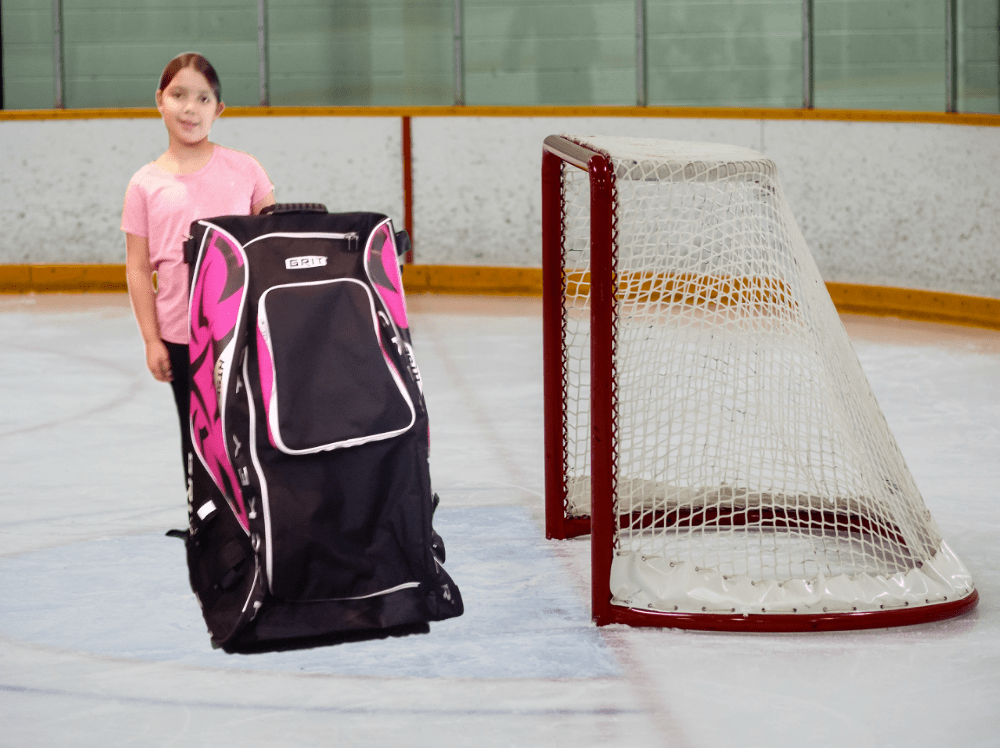 I love that the HTSE is ventilated. Let’s face it, gear gets stinky and we do not want that bag holding the smell. Also with the ventilation, I find the gear itself gets air more so it tends to dry and get less stinky. We of course hand our gear to dry in between games.

The HTSE Hockey Tower in botht eh 33 and 36 inch come with a folding frame so if it is not in use, you can fold it pretty flat for storage. The bag folds down easily by removing the Velcro arms on each side from one end. It literally takes two seconds to fold the bag down. We actually do not store our bags at all though as they are always being used.

I love the front pocket on the HTSE Hockey Towers. We personalize our bags on the front pockets by bringing them to the embroiderer to have team logo and player name put there. It helps for identification when you walk into the change room and there are a ton of Grit bags there.

We have the Grit HTSE Diva which is the pink one. We love pink here. It is available in 11 different color choices so there is one for every hockey player in the house.

As with all Grit hockey towers, there is a place for everything in the bag. 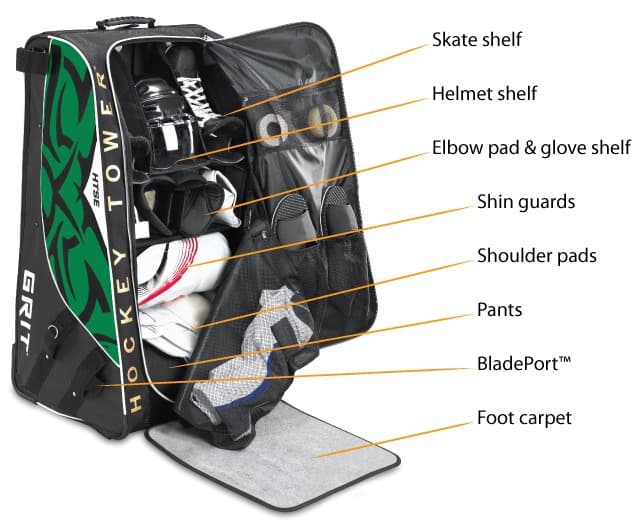 So which Grit HTSE Hockey Tower should you buy? It really depends on the player that you are buying it for.

I like the HTSE 33 inch Hockey Tower for my Little One. It is the perfect size for her gear and for her to be able to roll on her own. If you have a wee little player just starting out, you might want to try the Grit HYSE Hockey Tower. For the older kids and adults, you probably want to move into the Grit HTSE 36 inch Hockey Tower. If you want a hockey tower that you can carry instead of roll, check out the Grit Hockey Pod. I also recommend the Grit Hockey Pod for coaches and their gear. If you have a goalie, no worries, Grit has a goalie bag as well. There is also a garment bag to keep those jerseys in good shape.

To check out the full line of Grit bags, visit them here.

I could go on forever on how much we love Grit. It is no secret that it is probably the most popular hockey tower around. Just take a look at the rink the next time you are there and see which company’s bag you see the most. I am betting it is Grit.

The Grit line of products easily receive the MomMomOnTheGo seal of approval.

Make sure you check out Grit this holiday season and get your hockey player something that they will love and use.

You can find out everything you need to know about Grit and their products here….