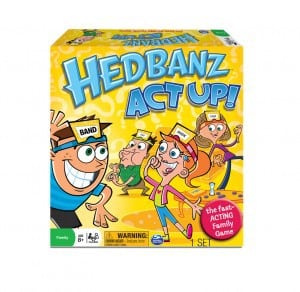 Hedbanz Act Up brought to you by SpinMaster is a fast paced, acting game that will have the entire family, acting, laughing, smiling and having a ton of fun.

Hedbanz Act Up! is the fast-acting family game where everyone’s a star! Each player draws a Game Card and puts it in their headband for everyone else to see. On your turn roll the die – whoever’s headband matches your roll will act out clues to your card. Can you guess what’s on your head before time runs out? Hedbanz Act Up! is family fun for 2-6 players ages 8+. Act fast with Hedbandz Act Up!

Get ready for a hilarious, high speed game where actions speak louder than words!
Based on the award winning Hedbandz, players must place a card in their headband and watch others act out your card.
The catch? No talking allowed! Players must guess before time runs out.
Hedbanz Act Up! is a fun, fast paced, and simple game that’s perfect for any game night, giving everyone from Junior to Grandma a chance to shine.

I have to admit that we do not follow the rules when we play Hedbanz Act Up. We have so much fun playing Hedbanz that we put aside the tokens and the die. We don’t keep score in any way when we play and we do not role the die to see who is acting out. We all want to act out each time because it is just so much fun. We play Hedbanz for as long as we want which ends up being quite a long time. It is not unusual for us to make it through most of the 180 acting cards in one game. We do use the timer though so we never get stuck acting one out for too long.

Hedbanz Act Up will have even the parents jumping and acting silly in attempts to get the person guessing to guess the right answer. I was acting out being on a roller coaster, a monkey, winning a medal, a kangaroo and so much more. As I sit and write this review about Hedbanz Act Up I have a huge smile on my face just from remembering the times my family has played the game.

Hedbanz Act Up is a winning game in my books and definitely receives the MomMomOnTheGo seal of approval. Even more, this game easily makes it onto our 2013 Christmas Wish List. This is the type of game that my kids ask to play time and again.

You can find Hedbanz Act Up at Walmart, Toys R Us and Amazon.

Disclosure: MomMomOnTheGo was provided product for the purpose of conducting this review. As always MomMomOnTheGo only supports companies and products that she loves. All opinions are those of MomMomOnTheGo.