Ever wanted to design your own HEXBUG? Now kids can do just that with VEX Robotics! The core of this simple,
flexible product line is the VEX IQ system used in STEM programs and elementary and middle school robotics
competitions around the world. 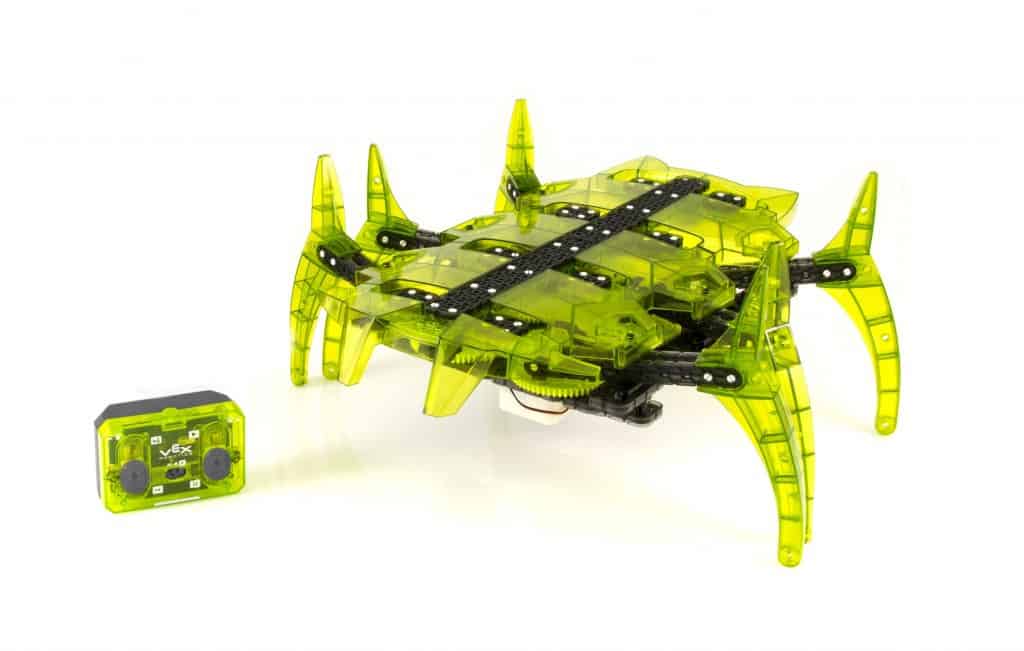 The build-it-yourself line of VEX Robotics kits fosters creative STEM learning through hands-on play by allowing
children to construct their very own jumbo-sized HEXBUG and customize its programming. With VEX Robotics,
kids as young as 8 can jump right in and snap these colorful robots together using the intuitive, tool-less
components.

To create the VEX Robotics Scarab, young HEXBUG engineers start by constructing the base chassis and
assembling the six green legs. Once the chassis is in place, the brain and motors are connected to the bottom of
the base, and the legs are attached. Next steps include building the outer body shell and then wiring the brain to
the sensors and motors using snap connectors.

 Motors receive signals from the brain, spinning into action kicking the legs into gear.

 Distance sensors reflect infrared light to alert the scarab before it crashes into its surroundings.

 Interlocking gears animate the scarab by transferring energy from the motor through the endoskeleton and
out to the legs to generate movement.

 The brain is the centralized computer that powers the scarab, relaying signals from the remote control and
activating the motors and sensors to bring the creature to life!

To program the robotic scarab, kids simply flip a series of switches on the robot’s brain, allowing for quick
experimentation with different modes to determine how it reacts when the sensors are activated. There are 64
different programming options from which to choose! There are three drive modes: Standard Driver Mode where
the kid drives the robot using the remote control, Autonomous Mode where the robot navigates itself using its
sensors, and “Crazy” Autonomous that simulates the real, random wandering nature of a living creature!

The HEXBUG VEX Robotics Scarab (MSRP $69.99) includes more than 250 snap together pieces and requires
three AA batteries and one 9 volt; batteries not included. When built the product dimensions are 15” x 16” x 7”.

HEXBUG VEX Robotics is compliant with CPSIA standards. Ages 8 years and up.

Okay so MomMomOnTheGo and her Little One, who is a 7 year old girl, tackled putting together the HEXBUG® VEX® Robotics Scarab. Now the age ranking for this product is 8 years old and up and I would have to agree with it. My Little One at age 7, felt a wee bit overwhelmed putting the HEXBUG® VEX® Robotics Scarab together. She was extremely excited about doing it, but wanted me to take lead on assembly, which I ended up doing. 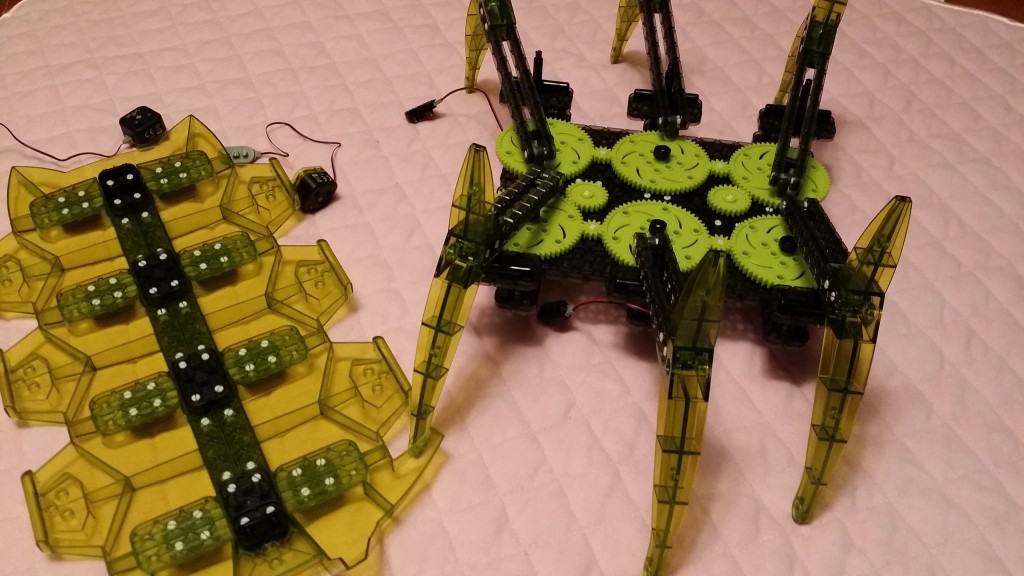 There are over 250 pieces to put together on the HEXBUG® VEX® Robotics Scarab. It is a great project but as I mentioned, younger ones may need a wee bit of help mainly because at a few points, the instructions are not quite clear.

There were a couple of times that I followed the instructions and put things together only to turn the page and then be told that the pegs had to be in a specific hole and all lined up with other pegs in other gears. I think a little clarification at a couple of points would have been awesome. But in the end, I was able to build our HEXBUG® VEX® Robotics Scarab and the process to getting it completed was completely enjoyable and rewarding.

So here is what we love about the HEXBUG® VEX® Robotics Scarab:

*Impressive size.
*Cool looking.
*Awesome color.
*Fun to control.
*Fun to experiment with the programming/settings.
*Fun to have built ourselves instead of just taking it out of the box.

If there was anything at all that I would ask to see better, is I would love the instructions a little more clear in a couple of spots. I don’t want to make this sound like a downfall for the product though. Knowing what I know now about the instructions would absolutely not stop me from purchasing the HEXBUG® VEX® Robotics Scarab. It is pretty awesome and tons of fun to built your own robotic scarab.

I will make mention that there is a learning curve for controlling the HEXBUG® VEX® Robotics Scarab, but that is part of what makes it so entertaining. It is built, put on floor, and control it all around. You need to learn what it can do and change the programming settings to explore its’ capabilities. It is in that exploration that really makes this product entertaining and a ton of fun.