Transformers has been in theaters for awhile now and has reignited the Transformer craze. 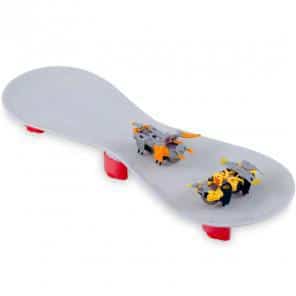 Each HEXBUG Warriors TRANSFORMERS has a hidden pop-up door, revealing whether the character is AUTOBOT or DECEPTICON. Each Warrior’s Indicator Light is shaped to represent the TRANSFORMERS character’s AllSpark.

Kids can operate their HEXBUG Warriors TRANSFORMERS in Training Mode, with unlimited health, for scrimmages and testing purposes. Once the Warriors are ready for battle, they can be powered into Match Mode and are set to enter into competition, where they crash, jab and jostle with their opponents until they win or lose by running out of health, at which point they deactivate. In Match Mode, each robot’s Shock Sensor activates its Damage Indicator Light which changes colors from green to red and blinks more rapidly as its health decreases.

Anytime you mix a product that is loved like HexBug with a character that kids are crazy about, like Transformers, the outcome is a winning result.

In our house you hear “Go BumbleeBee” in our battle arena. 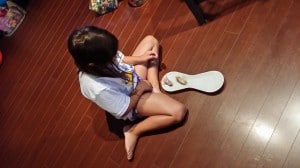 For those that love the battle toys, the Battle Arena will provide excitement.

Here is what MomMomOnTheGo likes about the Battle Arena:

*Familiar characters.
*Battle arena keeps HexBugs at bay and not fighting all over the house.
*HexBug quality found in all their products.
*Health indicator.
*Training Mode and Match Mode.
*Comes with the batteries.
*you can purchase the characters that you want separately.

My Little One likes to provide obstacles within the Battle Arena for the Transformers to maneuver around while battling. It provides added excitement. You can make the battles as exciting as you wish with creative imagination. Sometimes, our Transformers will switch battle weapons to make the battle a little more interesting.

I cannot think of anything that I would add or change to the HexBug Warriors Transformers Battle Arena. For those that wish to have a bigger battle, I suggest that you look at the Battle Stadium.