For the last few years, MomMomOnTheGo has been to the Investors Group Stars On Ice Presented By Lindt show in Vancouver, BC. It really is a special night for us, as even our little one gets to go to the show, which is way past her bedtime. I have to say that you know that a show is amazing when even your little one (who is now 6 years old) is so amazed and in awe of the show before her that she does not fall asleep despite the ending time being about two hours past her bedtime.

I truly can never put into words just how amazed and in love I am with the Stars On Ice shows. They are breathtaking. My little one and I have our favorite and of course it is Kurt Browning. My little one remembers him and describes him as the bald one….sorry Mr Browning. 🙂

I was asked at the intermission if my little one was in lessons. I guess they thought that she must be because of how much she loved the show. She actually isn’t in lessons at all. To tell you the truth, she is a hockey player. No twirls and jumps for her, just scrums in the corner and shots on a net. But really, that speaks volumes as to the entertainment value of Stars On Ice. No matter your interests in sports or your background, I truly believe that Stars On Ice has such an entertainment value that almost all would love the show.

The seats in Rogers Arena at the Vancouver, BC show were pretty full. I honestly do not know why there would be an empty seat in the house. This is a must see show. It may come every year, but there always seems to be a few new faces and a few icons that truly will not be there, skating for us forever. Each year that Kurt Browning is in the show I am thankful and hopeful that he will be there next year as well.

I would not do the show justice if I did not mention the other stars as they are so talented and their performances were breathtaking as well. I have to mention Shawn Sawyer. I can’t recall seeing Shawn Sawyer skate before. I don’t really follow figure skating all that much. If it is on, I will watch if I have the time, but come on, I am MomMomOnTheGo and truly, I don’t really know what watching TV, at least an adult show, is like.

Shawn Sawyer had the crowd entertained. He is so athletic, a performer at heart as can be seen by the heart he puts into his performance. When Shawn Sawyer is on the ice, you, as an audience member, can feel his love for being there. I was sitting watching him and thinking, wow, he could actually be one person who could maybe follow in Kurt Brownings shoes, or should I say skates, when Kurt Browning decides to retire from Stars On Ice. 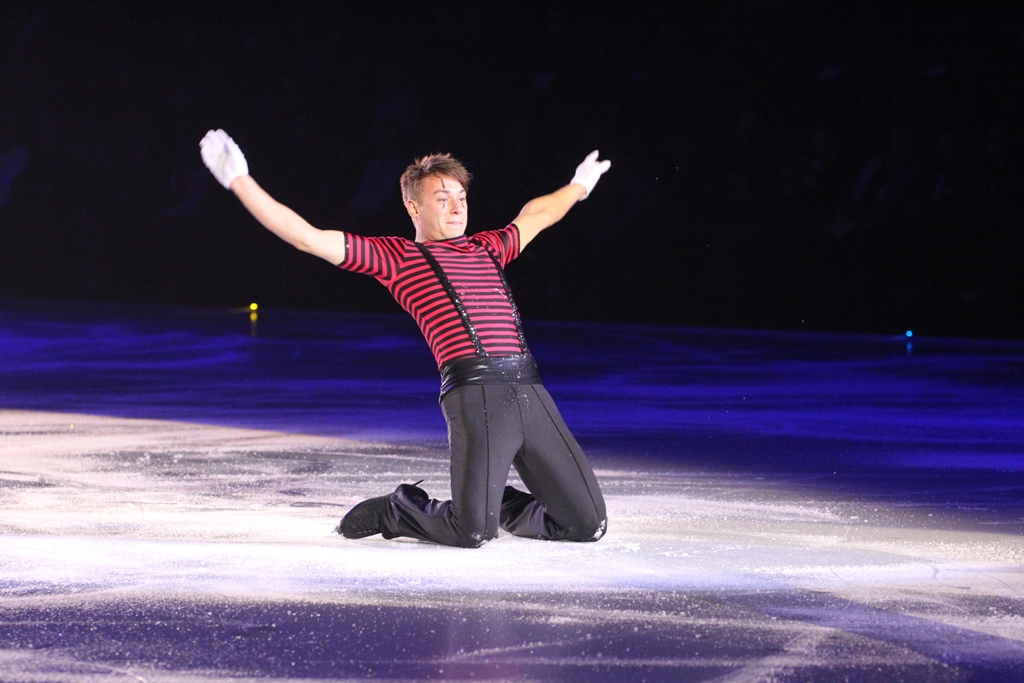 I could go on forever about each cast member, but you can read a bit about them on the Official Stars On Ice website.

I loved how the show started with all the cast performing a number. The opening performance really showed the talent of each member of the cast. My favorite part of the show was Kurt Brownings first solo performance. In a simple light blue silk shirt and to beautiful music, he flowed across the ice as if he was water running in a brook or wind blowing across a field. It was breathtaking to watch and gave me goosebumps. I also always love all the numbers that have more upbeat music as I find that they just bring you into the performance more with the energy that it creates.

I want to mention ticket prices. There is a wide range of ticket prices and you do not have to be right near the ice to enjoy the show. I actually find with little ones a little further back is great for them to be able to see the entire show. We were about 15 rows from the ice at center ice and our seats were perfect. Our seats were a little more on the expensive side though, but don’t hesitate to purchase the less expensive tickets as there really is not a bad seat in the house. If you can get the tickets similar to where we were sitting, it is well worth it.

Stars On Ice is done for 2013. Vancouver, BC always seems to be the last show on the tour, which is okay with me. It is nice to see the their last show, because you know that the cast wants it to be memorable and that they have really got it down by then.

If you are like me, you are already waiting for next years show. Bring on Investors Group Stars On Ice Presented by Lindt 2014. Oh and thank you Lindt for the lovely chocolates as we exited the show. Your chocolate is amazing and we are always buying them. Thank you to Investors Group for sponsoring Stars On Ice as well. MomMomOnTheGo truly knows that it is all the sponsors and support that helps make a show come together and be its best.

To stay connected with Stars On Ice and receive all the news over their off season and approaching their next tour, remember to sign up for their Fan Club which is now available in Canada.

You can also give Stars on Ice a Like on Facebook in order to keep up to date on all the news.

Disclosure: MomMomOnTheGo attended the Stars On Ice show as media for the purpose of conducting this review. All opinions expressed herein are those of MomMomOnTheGo and are based on our experiences at the show.