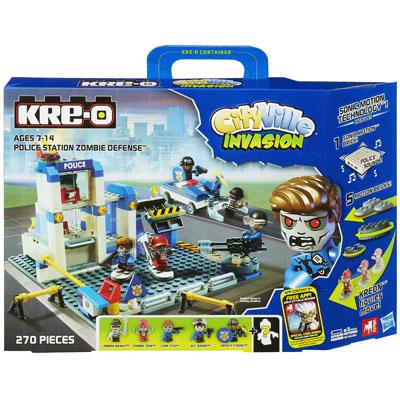 One of our favorite pastimes for my Little One and myself is building sets such as Kre-O sets. The latest set we built is the Kre-O CityVille Police Station Zombie Defense Set. 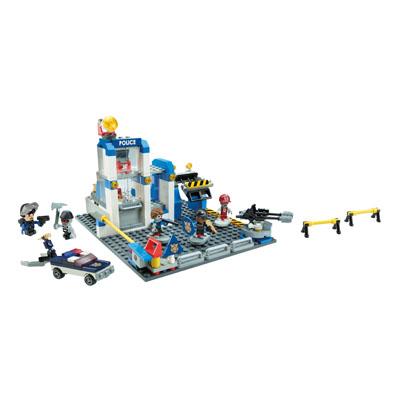 The city-building fun of CityVille comes to life! Build your own city with CityVille Invasion Kre-O sets and defend it from invasion. You can use the 270 pieces in this Police Station Zombie Defense set to build a police station with a rotating gun turret and a combat vehicle. Then it’s time for your Sgt. Baker and Deputy Strong figure to defend the station when your Zombie Bandit, Zombie Teen and Chief Zito figures attack! Will the zombie attack succeed? The set includes weapons for the best human-zombie battle ever! Who will your mystery Kreon figure turn out to be? There’s only one way to find out! The set’s Sonic Motion brick makes real police sounds! Use the 5 motion bricks to make your Kreon figures move. Build a Cityville zombie adventure with the Police Station Zombie Defense set!

I can tell that the time that my Little One and myself spend together with building sets means a lot to her, because she often draws a picture of the two of us at the table building a set. It is treasured time spent together and moments that I truly love.

In our household, we have an entire approximately six foot shelf full of building sets that my Little One and I have built. Once built, we tend to keep them built and then play with them using our imaginative play skills.

The Kre-O CityVille Police Station Zombie Defense Set is recommended for ages 7 and up, but my six year old and I built the set. I think that younger kids will love the set especially with help where they need it from an older sibling or a parent. Just remember that the parts are small and do present a chocking hazard so they are not recommended for young children such as those 3 and under.

The Kre-O CityVille Police Station Zombie Defense Set is a Parent Tested Parent Approved winner and it has also made the cut for the 2013 MomMomOnTheGo Christmas Wish List.

You can purchase the Kre-O CityVille Police Station Zombie Defense Set at your local stores as well as at Amazon.com and Amazon.ca.