March 19th, 2016 was World Monopoly Day and MomMomOnTheGo and family have been celebrating by putting the all new Monopoly Empire to the test……

In the Monopoly Empire game, players can own the world’s top brands. After choosing one of the uniquely branded tokens, players move around the board, and start building their empires. The game is a race to the top as players buy their favorite brands one by one and fill their towers. Players can own famous brands, including Nerf, Transformers, Levi’s, and more. Opponents collect rent from their rivals; the higher their tower, the more they can charge! For two to four players, the first player to fill their tower with billboards wins!

• Players own their favorite brands, including Puma, Levi’s, Nerf, and more
• Fast, fun gameplay
• Tokens and game pieces are based on the world’s favorite brands
• First player to fill their tower wins

First of all I have to say that we are HUGE Monopoly fans in our household. We have 4 different versions of Monopoly from the traditional, to an electronic banking version, right up to the newest addition of Monopoly Empire. I think it would actually be safe to say that Monopoly is one of my Little One’s favorite games and she is 8 years old.

For testing out the Monopoly Empire version of the game, I decided to ask my sister to come play along. I am very distraught to admit that she has not traditionally been a crazy Monopoly fan like the rest of us, but we still love her. I was ecstatic to learn that she absolutely loves Monopoly Empire.

I lost track of how many times we played Monopoly Empire in our first sitting, but I think it was about 8 times. Our desire to play so many times was fueled by the awesomeness of the game and the desire to finally defeat my 8 year old Little One. Somehow she kept kicking our butts in the game! 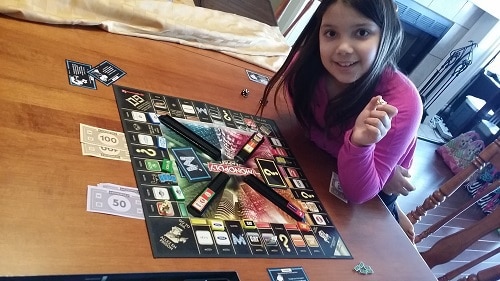 Monopoly Empire has awesome game pieces. My Little One was the transformer every game. I changed from the video game controller, to the tennis racket, to the sports car. I was looking for more luck in a game piece LOL. There is also a CAT digger and shoe for game pieces.

There are black towers that are placed on the board that as you purchase the company tokens, you place them in your tower. The first one to fill their tower wins. Sounds easy, but there will be twists and turns with Chance cards and Empire cards. I got nervous every time I landed on a Chance card as it always seemed that I was having to hand money over. The Empire cards are quite fun and provide different things that you can play throughout the game to try and get your tower filled up quicker or to get more money. The cards help add the twists and turns that create tons of laughter throughout the game.

We really loved the Auction aspect of the game for when someone does not wish to purchase a business tile. The auctioning can get everyone really involved and excited. We even had a few cases where the paid price was higher than the asking price for the tile because strategically it had to be done to prevent someone from winning.

We also loved that the game is not over when you run out of money as you can hand over your tiles as payment. It allows the game to go on with all players which is awesome.

Monopoly Empire is an awesome game and a perfect game for ages 8 and older for those family game nights. I highly recommend that you check the Monopoly Empire version of the game out. We absolutely love it.

For a fun activity, head on over to take the Monopoly Empire Quiz to see what type of boss you would be.

To find out more about Hasbro and Monopoly, check them out here….

I am excited to announce a giveaway for one Monopoly Empire. This giveaway is open to residents of Canada over the age of 18 and where permitted by local laws to enter and win giveaways. This giveaway is sponsored by Hasbro Canada. Please ensure that you read the full terms and conditions found at the bottom of the entry form.

Disclosure: MomMomOnTheGo was provided product in exchange for this review. As always, MomMomOnTheGo only supports companies, products, and services that she loves.