Celebrate the Global Sensation Peppa Pig In the All-New
“PEPPA PIG: MY BIRTHDAY PARTY”
Available Nationwide on DVD
March 18, 2014 from Entertainment One

New York, NY, February 5, 2014 – Spending time with the most loveable little piggy on the block will now be easier than ever when the animated preschool global sensation Peppa Pig, makes its’ first-ever U.S. retail-wide national DVD launch. The celebration begins March 18, 2014 with Entertainment One’s (eOne’s) release of Peppa Pig: My Birthday Party (SRP $14.98). Already a longtime UK phenomenon (#1 Pre-school property three years running), this 80 minute, fun-filled DVD is sure to capture the hearts of parents and little ones alike with the undeniable charm and fun disposition of the adorable Peppa.

Airing daily on Nick Jr., Peppa Pig follows the hilarious adventures of Peppa, a loveable little piggy, her family and all of her animal friends, including Suzy Sheep, Pedro Pony, Danny Dog and more. Peppa loves playing games, dressing up, visiting exciting places and making new friends, but her absolute favorite thing is jumping up and down in muddy puddles!

Peppa’s adventures are filled with wholesome entertainment the entire family can enjoy and always end happily with loud snorts of laughter. Recommended for ages 2-7, Peppa Pig: My Birthday Party features themes that kids can relate to and reinforces strong values such as family, friendship, trust and humor.

Peppa Pig: My Birthday Party DVD welcomes preschoolers to the charm and magic of Peppa’s world with All-New adventures featuring 14 fun-packed “Peppasodes” from the award-winning series, plus two fun educational extras, “Learn the Alphabet” and “Learn to Count.” In the title episode, “My Birthday Party,” it’s Peppa’s birthday and all of her friends are invited to her party where Daddy Pig gets lots of laughs with his attempt at performing a magic show. Other episodes include an exciting boat race, a school play, a train adventure, a day at the beach, a costume party and more! 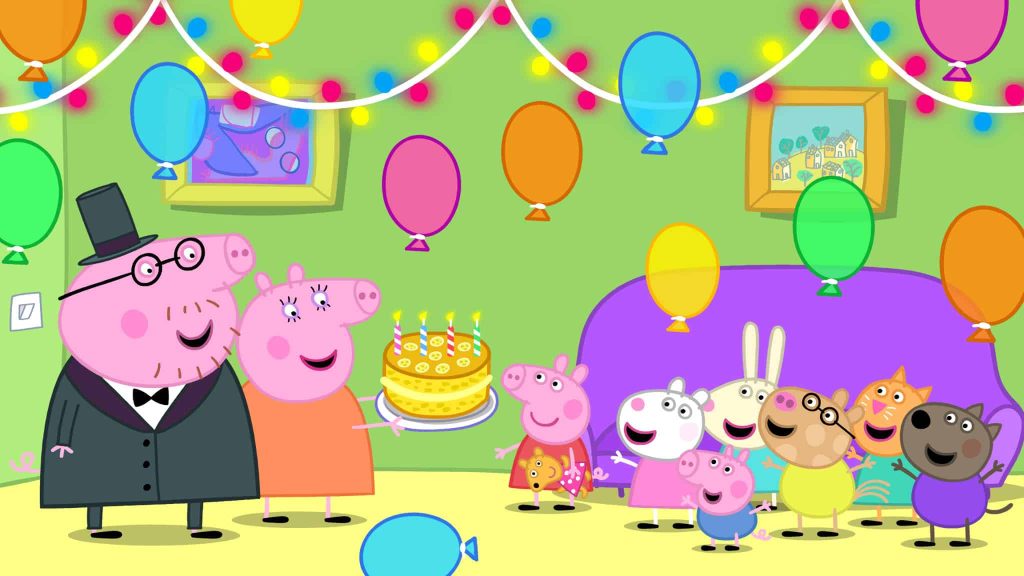 “Learn the Alphabet” and “Learn to Count”

Peppa Pig: My Birthday Party will also be available March 18th as a digital download on iTunes and other digital platforms.

Airing on Nick Jr., Peppa Pig follows the adventures of Peppa, a loveable, exuberant little piggy who lives with her brother George, Mummy Pig and Daddy Pig. Peppa Pig episodes are available on iTunes and DVD. Peppa Pig toys and books are available at Toys ‘R Us. For more information about Peppa Pig, please visit www.peppapig.com, Facebook at OfficialPeppaPigUS or Twitter at @PeppaPigUS.

Entertainment One Ltd. (LSE:ETO) is an international entertainment company that specializes in the acquisition, production and distribution of film and television content. The company’s comprehensive network extends around the globe including Canada, the US, the UK, Ireland, Spain, Benelux, France, Germany, Scandinavia, Australia, New Zealand, South Africa and South Korea. Through established Entertainment and Distribution divisions, the company provides extensive expertise in film distribution, television and music production, family programming and merchandising and licensing. Its current rights library is exploited across all media formats and includes more than 35,000 film and television titles, 2,800 hours of television programming and 45,000 music tracks.

We all think Peppa Pig is a great show in our household. My Little One just turned seven and I love that she still enjoys Peppa Pig. My Little One loves to make us all do snorting contests to see who can snort the best. It is rather cute. 🙂

Peppa Pig is great entertainment for children. The characters are amusing and attract children’s attention. I also love the educational value that is a part of Peppa Pig shows that is great for the younger fans.

I always recommend Peppa Pig programs and encourage you to check them out.