Peppa Pig: The Balloon Ride
Available on DVD and Digital From Entertainment One August 12, 2014

My Little One, who is now 7 years old, has the task of reviewing all the kids shows and new releases for me. The latest new release that she reviewed was Peppa Pig: The Balloon Ride.

For a bit of a background, my Little One has loved Peppa Pig since she was a wee one herself. So the task of reviewing the latest Peppa Pig release was an exciting task for her. She thought that The Balloon Ride DVD was awesome. My Little One has even watched it quite a number of times and can be found smiling and laughing throughout the entire DVD. 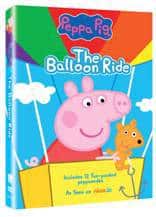 Here are some details about the newest Peppa Pig release……

Peppa Pig, the hit preschool series from Nick Jr., is taking kids entertainment to new heights with the all-new adventure-packed DVD release, Peppa Pig: The Balloon Ride soaring into retail stores nationwide, August 12, 2014 from Entertainment One. The 60-minute DVD ($14.98 SRP) features 12 episodes filled with the wholesome family entertainment and gentle humor that has preschoolers and parents everywhere falling in love with this charming little piggy.

A global sensation (#1 Pre-school property four years running in the U.K.), Peppa Pig and her animal friends Suzy Sheep, Pedro Pony, Danny Dog and more, will delight young ones with their fun adventures from a hot air balloon ride, to fun with painting, a new baby piggy, an exciting bicycle race, and of course jumping in muddy puddles. Peppa Pig: The Balloon Ride follows on the heels of previous release, Peppa Pig: My Birthday Party, which racked up rave reviews and quickly became one of the top charting kids DVDs of 2014.

Airing on Nick Jr., Peppa Pig follows the adventures of Peppa, a loveable, exuberant little piggy who lives with her brother George, Mummy Pig and Daddy Pig. Peppa Pig episodes are available on iTunes and DVD. Peppa Pig toys and books are available at Toys ‘R Us. For more information about Peppa Pig, please visit www.peppapig.com, Facebook at Facebook/ OfficialPeppaPigUS or Twitter at @PeppaPigUS.

Entertainment One Ltd. (LSE:ETO) is an international entertainment company that specializes in the acquisition, production and distribution of film and television content. The company’s comprehensive network extends around the globe including Canada, the US, the UK, Ireland, Spain, Benelux, France, Germany, Scandinavia, Australia, New Zealand, South Africa and South Korea. Through established Entertainment and Distribution divisions, the company provides extensive expertise in film distribution, television and music production, family programming and merchandising and licensing. Its current rights library is exploited across all media formats and includes more than 35,000 film and television titles, 2,800 hours of television programming and 45,000 music tracks.

As noted above, the running time of the DVD is 60 minutes with 12 full episodes.

The age ranking is for ages 2 to 7 years old. I think that the age ranking is perfect. My 7 year old still enjoys Peppa Pig a lot and was full of smiles and giggles while watching the show.

I really loved the Whistling episode. It made me chuckle and remember when my Little One was learning to whistle. She was determined to learn and a wee bit frustrated when others seemed to do it so easily. Now of course she can whistle no problem and loves to show everyone.

I also loved the Daddy’s Movie Camera episode. In this episode, Peppa knows how to work the movie camera while Mommy and Daddy Pig do not and need to read the instructions. This episode made me chuckle and reminded me of how it seems that our children these days are so technologically inclined, often seeming to know how to do things before us.

The DVD is wonderful with a great line up of episodes that your kids will giggle and laugh along with. You might even find yourself watching and giggling along too.