We were recently lucky enough to get to go see Phineas & Ferb The Best Live Tour Ever. I have to say that the show was spectacular.

When I looked around the audience, even the adults were smiling and singing. The show was for sure a fun event for all ages and I recommend that you check out the locations that it is coming to and go see it if you can.

The show was a live performance with a story line that followed the format of their TV show along with a concert all wrapped into one. It was very enjoyable. I would go see it again without hesitation even if it was the exact same show that I would be seeing.

In the Venue we were at, there did not appear to be a bad seat in the house. With ticket prices at: $26, $32, $55 and $70 plus service charges via Ticketmaster, it is apparent that Feld Entertainment made sure to have a price range for almost everyone.

This is how Feld Entertainment explained the show;

“Feld Entertainment’s latest live stage production, Disney’s Phineas and Ferb: The Best LIVE Tour Ever! takes audiences on a wild adventure with Phineas, Ferb and the entire Tri-State Area gang, as they spend the last day of summer creating the greatest invention ever. Inspired by the hit Disney Channel series and TV’s #1 animated show among tweens ages 9-14, Phineas and Ferb: The Best LIVE Tour Ever! is packed with witty humor, high-energy choreography, brilliant lighting effects, audience interaction and 14 hit songs from the animated series plus a never-before-heard original song written by “Phineas and Ferb” creators Dan Povenmire and Jeff “Swampy” Marsh.

Disney’s Phineas and Ferb: The Best LIVE Tour Ever! brings these television characters to life for the first time. Phineas, Ferb, Candace, Isabella, Baljeet, Buford and the rest of the Tri-State Area crew go from video to live action before the audiences’ eyes as they slide from the screen onto the stage. The performance unfolds as the gang decides to put on a show to make the last day of summer the “best day ever” but soon realize that they have too many great ideas for the show. Phineas and Ferb build an idea mash-up machine to combine their favorite ideas into fun and exciting musical numbers. Meanwhile, the audience sees Agent P, the alter-ego of the boys’ pet platypus Perry, in a way he’s never been seen before, doing stunts and tricks as he attempts to ward off Dr. Doofenshmirtz’s most evil ploy yet.

“For the first time ever, we take characters that begin our show in animation and have them transform into live action right in front of the audience’s eyes,” says Producer Alana Feld. “While maintaining the integrity of the characters, we present them in a whole new way that can only be done on stage.”

“Seeing Phineas, Ferb and the gang interpreted in a live stage show is a bit surreal and emotional,” Povenmire and Marsh declare. “After living with them as drawings and animation for so long, it’s amazing to see them actually moving around and feeling very human and real. We love it.”

With four Emmy nominations under his belt, writer Bradley Zweig creates a parallel universe on stage, with outrageous inventions and surprises advancing the plot that was derived from the content of the songs. “We have an amazing script, and our cast has done a remarkable job bringing each character’s role to life,” says Tallaksen. “The flashy dance numbers, amazing lighting effects and in-your-face acrobatic action really blows audiences away.”

Audiences will enjoy an assortment of different dance styles and movement throughout the show, including a reggae hip-hop beach party; a Broadway chorus line with top hats and canes; futuristic-themed acrobatics; and flashy, contemporary dance routines. The seemingly random changes in topic and quick movement from scene to scene that are hallmarks of the television show are exhibited on stage using pop culture references and unexpected events. One of the most memorable moments is when the boys combine Baljeet’s idea for a Bollywood number with the Fireside Girls’ desire for giant marshmallows. Tallaksen blends an Indian dance celebration with giant marshmallows.

One of the more critical elements in bringing this animated gem to life rested heavily on Costume Designer Cynthia Nordstrom. To accurately represent each character’s persona in relation to their environment, she had to follow the geometric designs, funky symmetry and block colors native to the TV series.

“Creating the costumes for this show certainly had its challenges,” explains Nordstrom. “We needed to be mindful of the acrobatics in the show, particularly involving Agent P and Dr. Doofenshmirtz, so crafting costumes that supported a lot of unusual motions was imperative. In addition to the intricacies involved in creating durable attire, we still needed to make sure the outfits translated into real life and accurately portrayed each of Phineas and Ferb’s visions.” 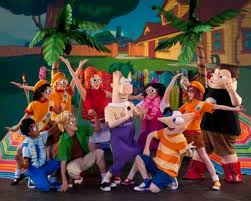 Every costume was specifically customized for each scene and incorporates a unique fashion form that captures the humorous and edgy elements from the show, from pants with squirrels on them to LED outfits for the disco miniature golfing number.

The eye-catching props and set pieces play pivotal roles in placing the characters in their surroundings. Scenic Designer and Feld Entertainment’s Vice President of Scenic Elements, Rick Papineau, and his team spent more than 4,000 hours designing and building an iconic on-stage setting.

“We really enjoyed creating an assortment of displays to satisfy the various wacky inventions in each production number,” says Papineau. “The props immediately set each scene, and the most important factor is making sure they are recognizable and relate to the overall theme of the show.”

One of the most impressive scenic pieces in the show is a 13 foot tall monster truck with giant marshmallow tires piloted by Buford. Other props and scenic displays include customized scooters with marshmallow launchers, a science lab to accommodate Dr. Doofenshmirtz’s crazy hijinks or “-inators,” and a custom-made jungle gym for Agent P, complete with treadmill. Perhaps the most critical piece that Papineau designed is the giant slide that transports the characters from the video screen to the live stage, which sets up the entire show.

Enhancing the impact of the props in Disney’s Phineas and Ferb: The Best LIVE Tour Ever!, nearly 1,000 lighting and video cues are triggered by software that helps create all the different settings in all the production numbers. Lighting Designer Sam Doty designed 27 gobo patterns that transform the stage, going from a bright and sunny summer backyard to a mysterious purple and green ambiance for Dr. Doofenshmirtz’s lab.

Disney’s Phineas and Ferb: The Best LIVE Tour Ever! is playing in more than 80 cities throughout North America and, with a high-powered storyline and award-winning musical ensembles, will have audiences everywhere experiencing the fun of summer — all year long!”

Above states that the show is for Tweens, but I think that they are truly underselling the show. My 4 year old attended the show with us along with our Tween and my 4 year old was enjoying the show just as much as our Tween. A glance around the audience showed that there was a large attendance of the younger than Tween crowd as well that were all singing and bopping along to the music and excitement in the show.

I loved how all the characters entered the stage and I will not mention how they did it here as I do not want to wreck it for you. It was very impressive for the crowd. I also loved how the show interacted with the audience. Here is a tip for you, if your little one gets asked to go with one of the supporting characters, tell them to say yes. It will turn into an awesome experience that they can brag to their friends about. That is all I will say 🙂

As far as the memorabilia goes; they were all typical costs for items found at Disney events and all well done so you will likely want to purchase at least one.

There are shows running from now until into April. Check out the Official Phineas and Ferb Tour website to see if the show is coming to a city near you.

About Disney’s “Phineas and Ferb”

“Created by Emmy® Award-winning Dan Povenmire (“Family Guy”) and Jeff “Swampy” Marsh (“The Simpsons” and “Rocko’s Modern Life”), this stand-out comedy series follows Phineas Flynn and his stepbrother, Ferb Fletcher, as they set out to optimize every day of their 104-day summer vacation, dreaming the impossible dream – and then doing it, including building a rollercoaster or a beach in their own backyard. Unbeknownst to them, their pet platypus Perry has a double life as suave secret Agent P, deftly battling the evil Dr. Doofenshmirtz to save the world. Meanwhile, older sister Candace is aghast at her brothers’ antics and makes it her life’s work to tattle on them to Mom and Dad, though somehow she can never seem to catch them red-handed.

Renowned for its sophisticated and good-natured humor, clever songs and noteworthy guest stars, “Phineas and Ferb” is a fan favorite in every major territory. It airs on Disney Channels and Disney XD channels in more than 168 countries and in 34 languages, reaching more than 279 million unduplicated Total Viewers worldwide.

Who is your favorite character in Phineas & Ferb? This picture from the Phinease & Ferb The Best Live Tour Ever is a hint as to who is mine. 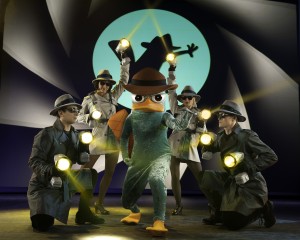