MomMomOnTheGo and family went on an adventure at Science World this past weekend. We were all very excited because our Science World adventure was a special one that they only do once and awhile….it was a Camp In.

What does a Science World Camp In get you?

As a Slumber Party visitor, you can also:

Continue your exploration of the science centre after the Slumber Party ends
Receive a free child pass for each child to come back and check out our next feature exhibition
Receive free overnight parking, until 8:30am the following morning

Maximum 4 children per adult
Children must be from 6–12 years old
Check-in from 6:30pm–7pm
Full Slumber Party payment required at the time of reservation

MomMomOnTheGo went with two adults (including herself) and our 10 year old that was turning 11 that weekend and our Little One who is 6 years old. Our Middle One had been at a Science World with her Girl Guides group before and loved it. I certainly knew that my Little One would love the Camp In. Okay let’s be truthful, the adults were just as excited as the kids. I know I felt like a kid again.

The first thing I have to admit to is that we are not the lightest packers! 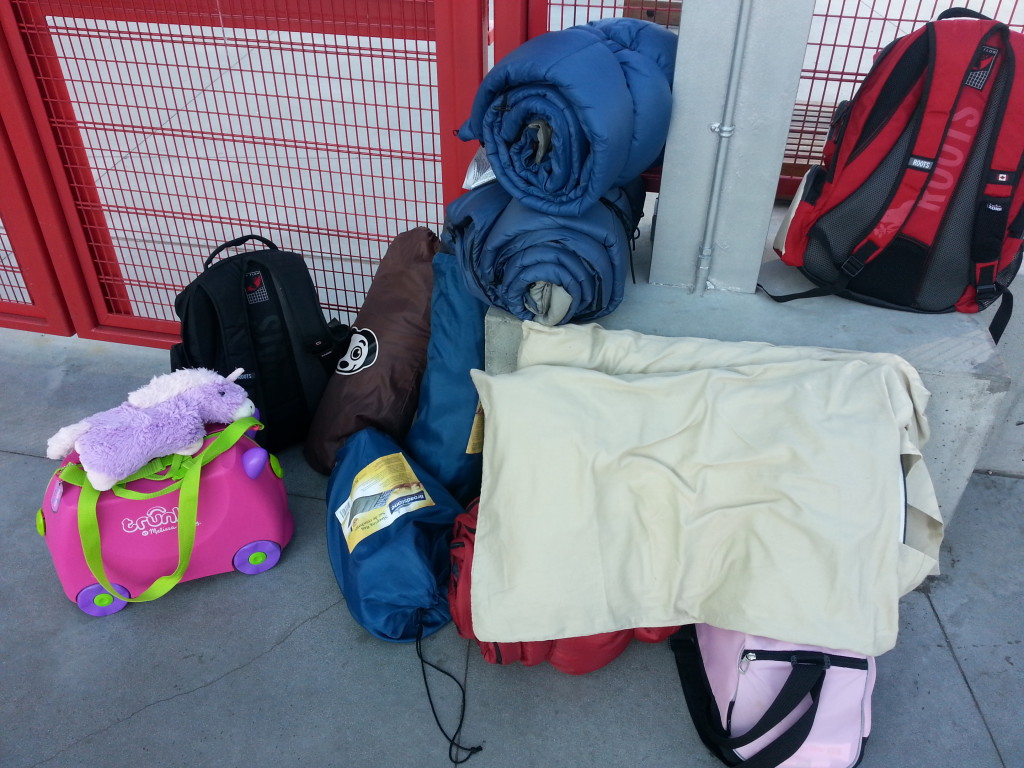 Yes it is true, we brought air mattresses because we prefer to sleep on them then the floor. I do have a bad back and I did not want to be sore the next day. I am not all that young anymore!

We checked in at 6:30 pm with gear in hand and the staff was super nice. They even helped us with all our camp in gear 🙂

After check in we were escorted to where we would store our gear. Once the gear was dropped we got to make a name tag and then to gather at Center Stage. There was time to wait while at Center Stage and the kids (and adults too) were entertained with hula hoops, spinning plates, and other really cool things. It was hands on so very engaging. 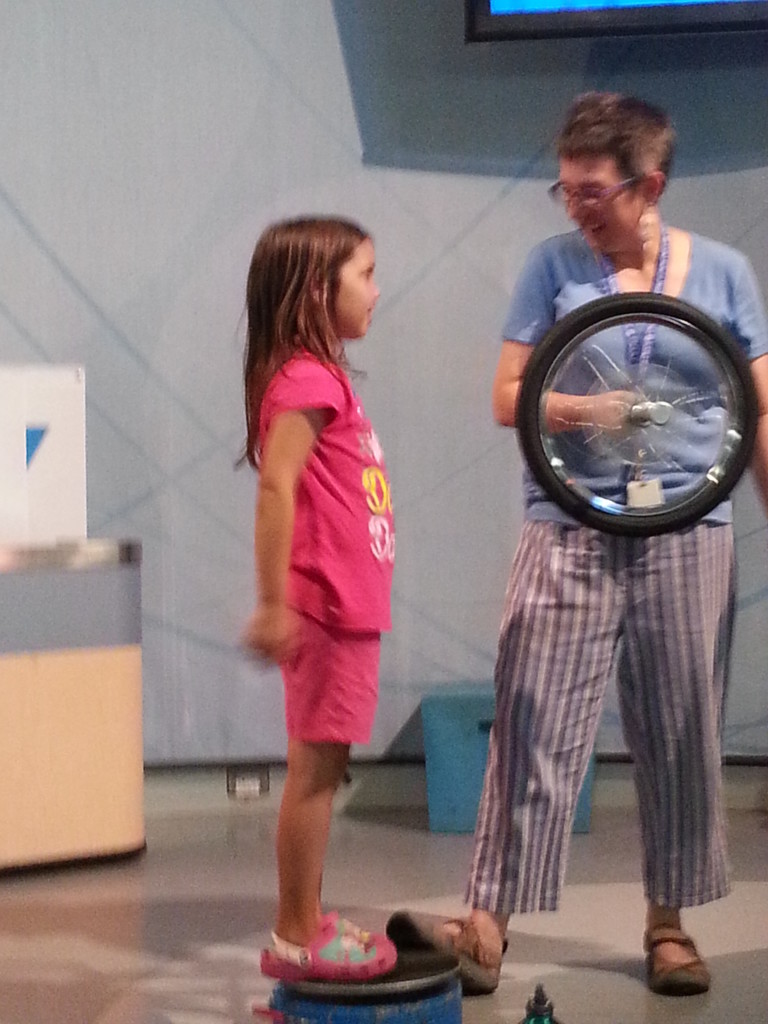 We then received an introduction from the head host and the Science World Team Members also introduced themselves. We were divided into two teams of approximately 15 adults and kids on each team.

Our first event of the night was the OmniMax Theater for Flight of the Butterflies.

Girls and butterflies is all I need to say and you must know that the movie was a hit for us. My Little One did not like the scene when they showed frozen butterflies and wet butterflies falling out of the sky. 🙁 She loved the movie overall though and the rest of us enjoyed it as well.

What the adults were in awe with the most was the tour of the theater first. The screen, lights and speakers are enormous. It is pretty fascinating technology.

After the movie, we got to go to the rooftop garden for a view of Vancouver. I wish it had been dark out. I love nighttime views when it is dark and the city is full of lights. Having said that, the dusk view was amazing. We had a wonderful time to take some pretty awesome photos. The Science World staff also took family photos for people which was really awesome.

After the roof top we finally split into our two teams and went of on planned adventures throughout Science World. They were well planned and the length of the events were perfect. The great thing was that we also got to do things that you normally don’t get to do in a normal daytime Science World visit; like meeting Zoom the Turtle in person. 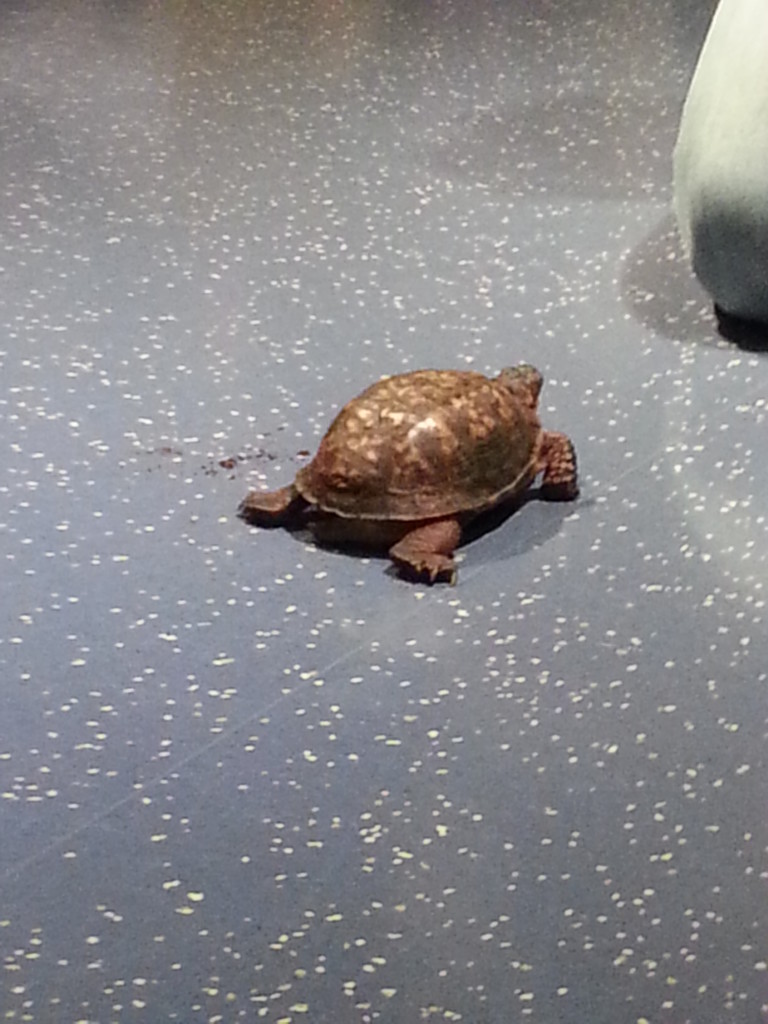 At this time, I realized it was really late and that the gift store was no longer open. We were supposed to have a chance to shop in the gift store but were never afforded the time or opportunity to. I had promised my girls that we would get something from the gift store and that just did not happen. I think that Science World really missed out on a profitable situation here as I would think that a lot of parents would have done shopping in the gift store.

The snack shop was also closed and that was upsetting. We could see wonderful snacks and slushies and could not purchase them. One parent asked if it would be opened and was told no.

I know that they are trying to maximize time for the adventure itself, but part of the adventure is snacks and shopping and I think that they would find the evening very profitable if they had shopping time and the snack shop open.

After snack time there were more adventures to go explore. By this time I was yawning, but the kids were going strong. I assessed the crowd and noticed the parents were getting tired, but the kids just wanted more and to keep going.

I took the opportunity to ask what time we would be going until and was told we should be in bed by midnight. I also hit the floor. Midnight? Yep midnight was about right. By the time the exploration was over, beds set up, kids in bed, and story read, we were hitting midnight. My mom brain was calculating grumpiness level that we would be enduring the next day based on the amount of sleep the kids were getting. Okay, I have to admit, they were grumpy the next day but it was worth it. Nothing a nap cannot solve! 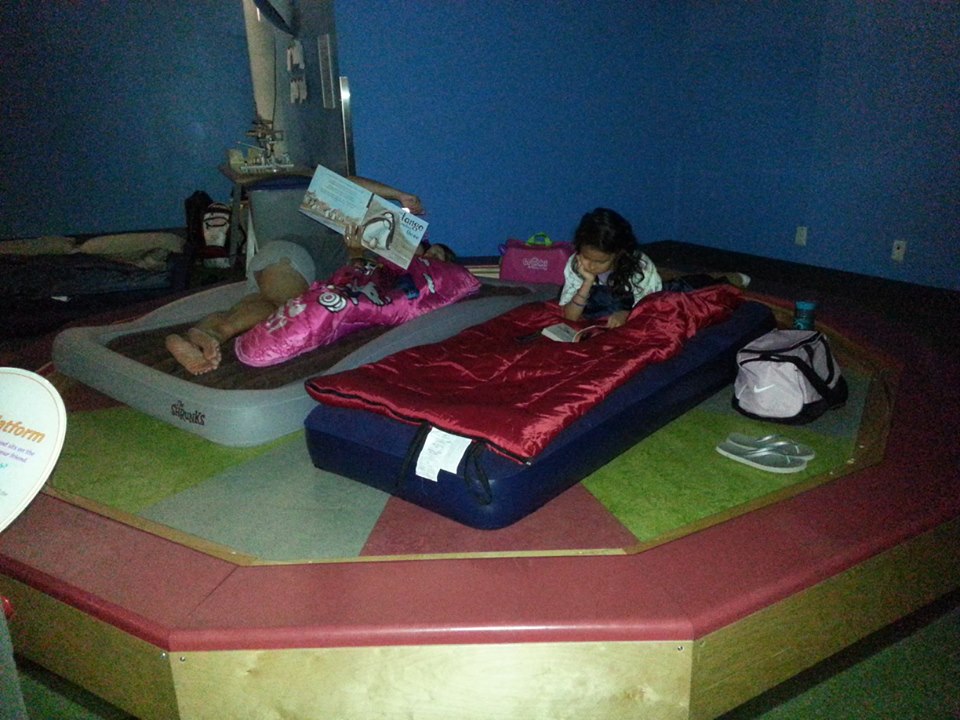 So sleep we did. Well the kids slept. I enjoyed the view of BC Place lit up as I could see it through the window. It was awesome. Night skies and view….I love it.

Morning came too soon and it was time to pack up and get to breakfast. Breakfast was a little buffet of yogurt, cereal, juice, coffee and tea. A little fuel to keep everyone going during the morning show. After the awesome morning show, we were on our way. On your way out, you get a stamp on your hand in case you wish to return that day to visit Science World during regular hours.

We left Science World all tired, but happy. We all had a great time and we would all go again.

Watch this little MomMomOnTheGo goes to the Science World Camp In video.

Disclosure: MomMomOnTheGo was provided product for the purpose of conducting this review. As always, MomMomOnTheGo only supports companies and products that she loves. All opinions expressed herein are those of MomMomOnTheGo.