On May 13th, 2011 I went to the Sears Stars On Ice show presented by Samsung at the Roger’s Arena in Vancouver, BC. Their May 13th show was the last show in this years tour and it is a shame that the tour is now over.

I was expecting to go to Stars On Ice and enjoy the show. I thought it would be great entertainment. Well, I have to tell you that I more than enjoyed the show. The show was breathtaking and this is coming from someone who is not necessarily a figure skating enthusiast.

Stars On Ice provided moments where I was laughing, where I had goosebumps, where I was amazed and even where I realized I was watching not just a show, but art and it made me feel alive. The emotion flowed from the skaters to the audience during their performances. It was obvious that these skaters were doing Stars On Ice because they love skating, they love performing and they love connecting with their audience.

The skill from all the Stars On Ice skaters is beyond words. Most of the population could not do the moves that they do on land and they are doing them on ice and making it look easy. The stars were also in sync all the time while executing every single move and jump. I think about what I watched now and my arms get goosebumps because of how much I loved the show.

I loved the fact that there were performances that were meant to make you laugh, which they did. Kurt Browning brings the show to life and adds great comedic and passionate content to it. 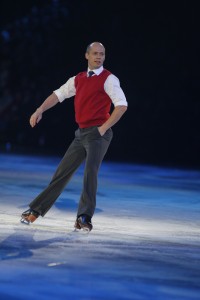 Honestly, I could not believe with the quality of Stars On Ice that there was an empty seat!

No matter where you sit, it is a great seat. I actually think that sitting a little higher up is better because you can see everything that is going on over the entire ice surface. Sometimes a lot is happening all at once during the show and it is great. However, I am sure that the people who were sitting on the floor right beside the ice surface would not trade their seats in for the world, especially after they got to give the stars a high five at the end of the show.

Every price point for the seats are, in my opinion, reasonably priced and as I said every seat provides a great view. So no matter what your budget is, you see a great show. The price range for the seats was from approximately $35 to $94 plus all the taxes.

In my opinion, the price range of the memorabilia was very reasonable and affordable as well. Programs were $15, you could get a t-shirt for as low as $20 and for $10 you could get an amazing picture of the cast of the show. There were more items than what I mention, but overall they were reasonably priced which is something I rarely find at performances.

To put the prices of the Stars On Ice memorabilia into perspective, I recently took my one daughter to her dance competition, and I could not purchase a photo of her or an article of clothing for as little as the Stars On Ice merchandise was selling for.

The fact that the seat pricing and memorabilia is reasonably priced is just another sign that the organizers of Sears Stars On Ice are creating the show for the audience. They are making it a family experience that an entire family can realistically attend.

I do have to say that I wish the show started earlier. There were a few sleepy heads leaving after the show and a couple of parents carrying sound asleep little ones. I would love to see an afternoon time slot for the show next year.

I want to thank Sears Stars On Ice for providing our lucky readers with a family of 4 passes to the show. I am hoping that we can partner with Stars On Ice again next year to send another lucky family to next year’s show.

To make sure you stay up to date on the Stars On Ice performances, I suggest you follow Stars On Ice on Facebook.

I cannot wait to see next years show 🙂