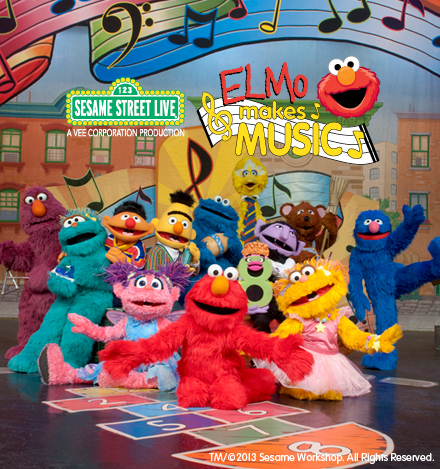 My Little One loved Sesame Street Live, Elmo Makes Music. We have actually seen the show before and it was just as good the second time around as the first. I have to admit that I was not sure if my Little One, who is now 6 years old, would like the show, but she did. There are parts of the show that are undoubtedly getting too young for my Little One, but I love her willingness to go to shows and review them with me.

My Little One was smiling, singing and clapping throughout the show and so was her 6 year old little friend that we brought along with us. Both of the girls came out of the show saying that it was a great show. My Little One would recommend the show to other kids and so would I.

The show has an intermission which is great for the younger ones to have a bathroom break.

There were awesome cupcakes and mini donuts at our venue which we of course loved. They were good pricing and what would be expected from a live show.

There is of course a ton of memorabilia that you can purchase and from looking at the prices, I would say that the items were generally well priced compared to a lot of other live shows that I have been to. The one thing that your Little One will undoubtedly want is the Elmo balloon that they sell at intermission. The Elmo balloons are a whopping $10 each so if you get one, make sure to tie it onto something so the balloon does not float away!

The show had all the familiar characters and ones that the kids just love. From Elmo himself, Abby Cadaby, to Cookie Monster and more, your kids will see the characters they know and love.

I have to say one thing that I absolutely was not impressed with and this pertains to the Venue and not the show itself. We went to the 10:30 am show. I was sitting beside a young father with their approximately 6 month old baby and the father was drinking beer. Yes, drinking beer at 10:30 am at a children’s live show. Personally, that is just not okay with me. Can we not abstain from consuming alcohol for at least an hour at a children’s show?! Why is the Abbotsford Entertainment & Sports Center even need to serve alcohol at the children’s event?! Not impressed with this at all.

I also have to touch base on something I overheard from a parent. In Sesame Street Live, Elmo Makes Music, Elmo and friends ask the audience to keep a secret that is a surprise they are doing for a friend. I think that this is great because it helps teach children the difference between good and bad secrets. Keeping a secret about a surprise for a friend is a good secret. Well I heard a parent behind me say that this is out of date as secrets are now taught to be bad. I completely disagree! Do we not keep secrets about presents, surprises, the type of birthday cake we buy someone and much more? It is very important to ensure our children know the difference between good and bad secrets and Sesame Street Live helps teach us a great secret, being a wonderful surprise for a friend.

Disclosure: MomMomOnTheGo was provided tickets for the purpose of reviewing this show. As always, all opinions are those of MomMomOnTheGo.