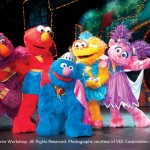 We just got home from seeing Sesame Street Live Elmo’s Healthy Heroes and our family loved it.

We saw the show at the Thunderbird Stadium in Vancouver, BC and I thought that the way they set the stage up for the show was just perfect. There was not a bad seat in the house. I was actually surprised to see that there were empty seats for the show.

Sesame Street has spanned decades and even to this day it makes children of all ages laugh, smile and learn. I thought it was a fun show and I thoroughly enjoyed watching my 4 and 8 year old laughing, smiling and signing along. It is amazing to see my girls’ faces light up when they see their favorite character come out.

The Venue itself was clean and as I said the seats were great. We felt really close to the stage as they set the stage up in the narrow portion of the arena instead of putting the stage at the far end of the arena.

I found that the memorabilia was okay priced in comparison to some children shows I have been to. They do bring out $10.00 Elmo balloons at intermission that all the kids want of course. I personally thought the balloons should be brought out at the end of the show. All the parents that purchased a balloon were forced to hold it down and manage their kids for the second half of the show.

There were tickets for the show we saw still available and people were purchasing tickets just before the show. I would personally recommend taking your little ones to this show. It was entertaining and they learn about healthy habits.

If you are wondering how to purchase tickets, you can get them through Ticketmaster.

Here are the remaining shows for this weekend at the Doug Mitchell Thunderbird Stadium in Vancouver, BC:

If you cannot make the Sesame Street Live shows this weekend, they are in Abbotsford, BC on August 12th, 13th & 14th.