Vancouver, BC–SKOOKUM festival organizers are pleased to announce SKOOKUM After Dark, an intimate concert series that will continue where the day left off. The three-day long celebration of music, food and art is not limited to Stanley Park – SKOOKUM After Dark will feature a variety of artists performing at a number of unique Vancouver venues including the Rickshaw, The Railway Stage & Beer Café and The Imperial.

“SKOOKUM After Dark adds another component to the SKOOKUM music experience,” says Paul Runnals, SKOOKUM Festival Director. “These smaller venues provide a different showcase environment for music – one that would appeal to festival attendees looking for a unique and intimate performance from an artist.”

Tickets to SKOOKUM After Dark will be available as add-on single purchase tickets and will go on sale Thursday, August 23 at 10am through www.skookumfestival.com 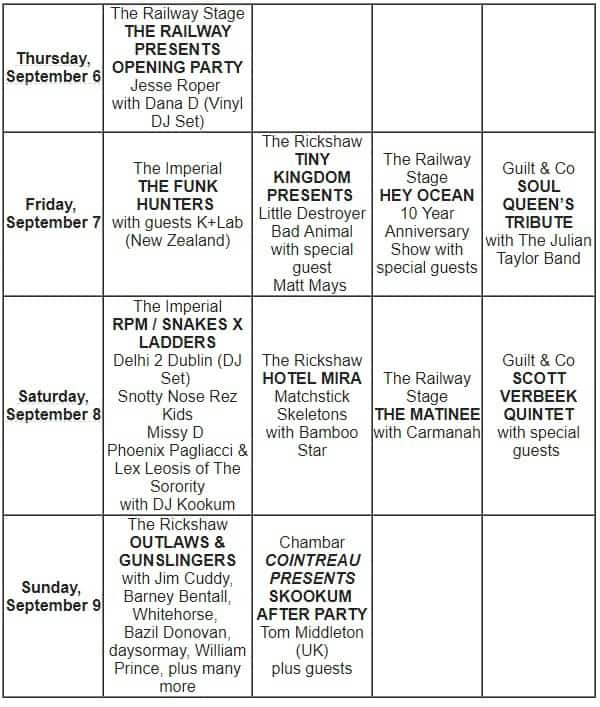 Launching September 7-9 in iconic Stanley Park, SKOOKUM will feature four stages of contemporary music performances with over 50 stage performances, live and multimedia art installations; gourmet culinary experiences from some of Vancouver’s most acclaimed restaurants; pop-up and roaming entertainment throughout the weekend and tasting areas showcasing some of the best BC wines, locally brewed craft beer as well as select offerings from local area craft distilleries. SKOOKUM Festival is produced by BRANDLIVE in collaboration with Virgin Mobile.

To learn more about SKOOKUM and the After Dark series, please visit: www.skookumfestival.com

About BRANDLIVE
BRANDLIVE produces a wide range of events throughout the region; from celebrity gala dinners and private events to themed Olympic pavilions to concerts and festivals. Select highlights include the annual BC Children’s Hospital Crystal Ball Gala and Canada Day at Canada Place celebrations; the 2010 Winter Olympic Victory Ceremonies at BC Place; Alberta House, Vancouver House and Heineken Holland House at the 2010 Winter Olympic Games, Multiple Grey Cup Festivals, the annual Honda Celebration of Light Fireworks Festival, The “Whistler Presents” Summer Concert Series, Sarah McLachlan’s “Voices in the Park” and “Summer Sessions at Ambleside” fundraising concerts as well as their own “Squamish Valley Music Festival” – which attracted over 350,000 patrons while generating an economic impact in excess of $150 Million dollars during its’ six year run.

About Virgin Mobile Canada
At Virgin Mobile, you’re not a customer, you’re a Member and “Members Get” exclusive deals from awesome brands, a shot at VIP access and one-of-a-kind experiences. That’s on top of super-hot smartphones on a super-fast network with plans that have loads of extras built right in! And now eligible Members in Ontario and Quebec can say Hi to Home Internet with ultra-affordable pricing. Virgin Mobile Members and Canadians can do some good in their local communities by helping at-risk and homeless youth in Canada gain skills to get jobs with Virgin Mobile RE*Generation.