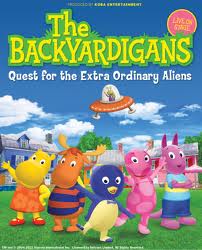 Last year we saw The Backyardigans Quest for the Extra Ordinary Aliens and we enjoyed it so much that we just went and saw it again when it came to town.

Our family really loves The Backyardigans. The creativity that goes into their shows on TV and Live are incredible. It truly reminds me of being a kid and in the backyard, make believing and playing with my friends. Every time I watch The Backyardigans it is like a personal journey back into my childhood and it brings great memories and smiles to my face.

Both times we have seen The Backyardigans Quest for the Extra Ordinary Aliens, my little one has been in a trance watching every move of each of the characters. Her favorite character is Pablo, although she loves them all. This time she brought her plush Pablo and was holding it up to and dancing with it.

The wonderful thing about the show is that the kids are entertained by an amazing story line that has all the familiar songs built in. So the crowd was up and singing and dancing along with the characters on the stage. At one point the kids all ran towards the front of the stage and were dancing. It was quite the awesome sight to see.

Both Venues the seating was awesome and allowed for great view of the stage. The seats were comfortable and I like the access to the booster seats for the smaller kids at the Abbotsford Arts Center.

During the show this year, there was a small technical difficulty with the background images displayed on the screens. There are two large screens that images are projected onto to help make the scenery complete. At one point in the show the screen displayed an error message and then went black. It was black for about three minutes before they had it up and working again. Honestly though, I think it was just the adults that would have noticed the technical difficulty. My little ones and the ones around us did not even blink or make a comment at the black screen.

There was memorabilia available for sale and to me it seemed in line with the prices that are typically found at live shows. It is possible to find the products for less at stores, but as I said, the prices were definitely in line with what is charged at live shows. I was a little disappointed that they only had size 2 available in all the shirts. There were a lot of plush character stuffies and DVDs of their TV shows.

To make sure you know about The Backyardigans’ tour dates, you can bookmark their Official Website. I would also recommend that you bookmark Koba Entertainment who is the company that brings us all the live shows for The Backyardigans, Caillou, Franklin, Doodlebops, Max & Ruby, Toopy & Binoo and Richard Scarry’s Busytown.

If you are looking for a show to go see, make sure to keep in mind that Richard Scarry’s Busytown might be coming to a City near you soon. Tickets are already on sale and we have our tickets. 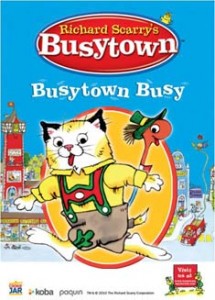 Our American friends are very lucky because the Max & Ruby Bunny Party is touring in the USA and tickets are on sale now for that show as well. I really wish this show was coming to Canada as my little one is CRAZY about Max & Ruby also. Hopefully they hop up North to Canada. 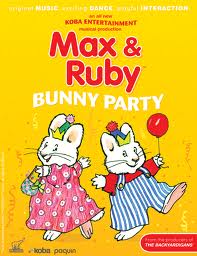 For other Max & Ruby fans, the Bunny Tales DVD is now available. 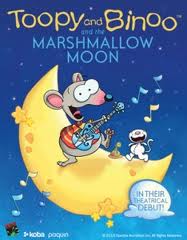 For those Toopy & Binoo fans that have been waiting and wanting a Patchy Patch plush doll, he is now available.

I hope that you enjoy the shows as much as we do.