When the decision is made to start a family, I think we all have pictures of everything working out wonderfully. I know I sure did or at least, I did not expect to have a ton of hurdles to jump over to finally get pregnant.

Getting pregnant is supposed to be a time that is enjoyable, full of love, and memorable, but that is certainly not always the case. I have heard from many of you about your trials and tribulations on getting pregnant.

For me, getting pregnant took forever. I had to turn to a fertility clinic and insemination in order to finally get pregnant and even then, it took 11 tries to finally get pregnant. That is the short version of my story too. I also had to go through a surgery after the 6th insemination process as the doctors themselves were not quite sure why I was not getting pregnant.

I can remember quite clearly trying to do everything right with each of my attempts at getting pregnant. Vitamins, resting, I did basically everything except standing on my head! On the 11th try I had pretty much given up. I thought I would never get pregnant. I almost ignored the fact that I had just been inseminated. I remember having a broken tailbone at the time, getting inseminated, and going home for a run. It was then, when I decided to let go of all the stress of getting pregnant that I finally became pregnant.

The process I had to go through to get pregnant was very clinical. My adventure included trips to the fertility clinic, gowns, rubber gloves, tubes, applicators, well you get the picture. Nothing really relaxing about that scenario to say the least.

Well, I am pretty excited to let you know about a product that I recently came across called The Stork. The Stork helps you in your journey to becoming pregnant in the comfort of your own home. 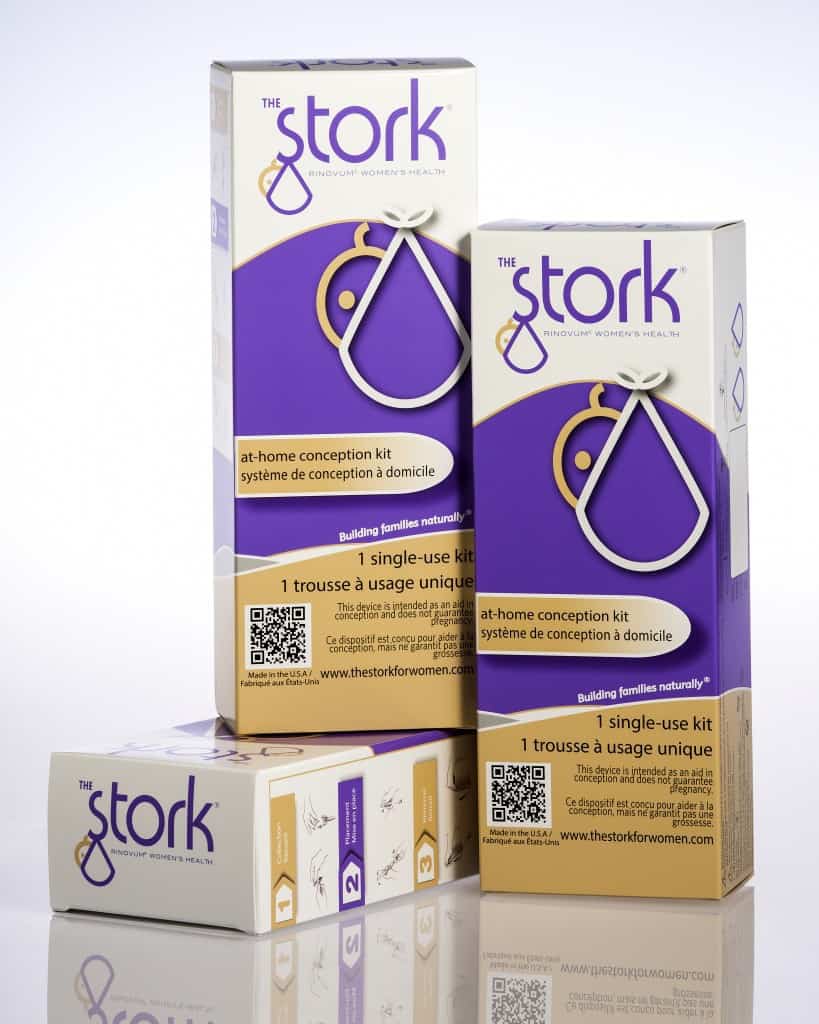 The stresses I felt while getting pregnant were significant and I think impacted my ability to relax and actually get pregnant. I was stressed about the cost of each insemination although the cost was more than worth it in the end. The reality though was I had to fund each insemination which when I was finally pregnant was $6600.

Here is a video to help show you just how The Stork works….

Whether you are just about to head to a fertility clinic, or you have maybe already tried the fertility clinic a few times, make sure to read about The Stork and what it has to offer. I have personally never used The Stork, but I do know that if it had been available at the time that I was trying to get pregnant, that I would have investigated it to see if it was a right fit for me.

If you are looking to purchase The Stork, you can find them at Rexall, London Drugs, Jean Coutu, Uniprix, Brunet, Familiprix, Amazon Canada, and Amazon USA.

If you wish to explore The Stork more, you can check them out here…..

There are a couple of giveaways that you can enter….

The first is a chance to win a Night Out For Two valued at $500 courtesy of The Stork. This giveaway is open to residents of Canada, excluding Quebec who are the age of majority in their province/territory. Please ensure you read the full terms and conditions found at the bottom of the entry form here.

I am also excited to announce a giveaway one The Stork to one lucky fan of MomMomOnTheGo. This giveaway is open to residents of Canada, excluding Quebec, who are the age of majority in their province/territory. If you enter on more than one blog for this promotion, you can only win on one. The winner will receive the prize 4 to 6 weeks after the close of the giveaway. Please ensure that you read the full terms and conditions found at the bottom of the entry form.

“Disclosure: I am part of The Stork at-home conception aid campaign with Influence Central and I receive special perks as part of my affiliation with this group. The opinions on this blog are my own.”