Based on the popular superhero franchise, Nickelodeon is producing 26 new episodes one of the most successful boys’ action properties of all time, Teenage Mutant Ninja Turtles (Turtles). The CG animation will premiere in late 2012 on YTV and explores the camaraderie of four teenage brothers learning to rely on one another as they unravel the mystery of their existence and train to become heroes.

Michelangelo, Leonardo, Donatello, and Raphael are mutant turtles who have been trained in the art of ninjutsu by their rat sensei, Master Splinter. Emerging from their sewer lair, the reptile brothers confront the wondrous world of New York City, facing villains more dangerous and pizza more delicious than anything they could have imagined.
Through battles with Shredder, the Kraang and loads of super-powerful mutants, the Turtles learn to rely on themselves and each other as they grow to become the heroes they are destined to be.

Leonardo “The Leader”
Leonardo dreams of being the perfect hero: a brave, decisive, square-jawed leader of men, just like his idol, Captain Ryan, from his favorite TV show Space Heroes. Unfortunately, right now he’s an inexperienced teen in charge of three smart-aleck brothers who love to poke fun at him. But in the end, the other Turtles know they can always count on Leo to hatch a plan that will lead them to victory. 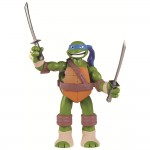 Raphael “The Muscle”
A straight-up brawler, Raphael has no patience for hiding in shadows or keeping his voice down. Tough, brawny, and aggressive, Raph would rather fight first and ask questions later, which sometimes gets the Turtles in over their heads. He and Leo constantly clash over the best plan of action—Leo likes to plan, and Raph likes action. Raph’s also got a sarcastic sense of humor, and the only one safe from his insults is his loyal pet turtle, Spike. 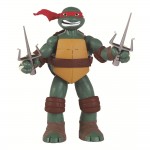 Donatello “The Brains”
A brilliant inventor, Donatello makes all of the gadgets, weapons, and vehicles that keep the Turtles one step ahead of the bad guys. But sometimes he’s too smart for his own good, like when he’s so busy admiring an enemy’s futuristic laser cannon that he forgets to run for his life. The most socially awkward of the Turtles, his attempts to impress his crush April often backfire. Donnie, it seems, is an expert in every field—except talking to girls. 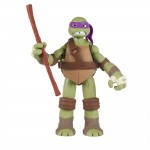 Michelangelo “The Wild One”
The most fun-loving and energetic of all the Turtles, Mikey is enthusiastic about… well… pretty much everything. Mikey yearns to be part of the real world, and insists that people would accept the Turtles if they only got to know them. His spaciness often makes him the butt of Raph’s jokes, but more than once Mikey’s outside-the-box thinking has saved their shells. What he lacks in focus, he makes up for in creativity, and his unpredictability makes him tough to beat. 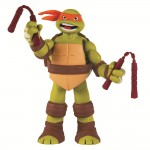 April O’Neil
A gutsy and independent sixteen-year-old, April befriends the Turtles after they save her from a Kraang attack. April takes it upon herself to introduce the Turtles to the wonders of New York and is their main connection to the outside world. When Splinter discovers she has unusual talent, he takes her under his wing.

Splinter
The Turtles’ sensei and father figure, Splinter is a stern disciplinarian, Zen master and cryptic philosopher. Splinter was once Hamato Yoshi, one of the world’s greatest ninja masters, but after a battle with Shredder left his life in ruins, he fled to New York, where he was mutated into a rat in the same accident that mutated the Turtles. Having lost a family once, he is determined to train and protect his new one at all costs, though he realizes that he can’t keep his sons underground forever.

Shredder
The commander of an evil ninja army called the Foot Clan, Shredder is one of the deadliest martial artists in the world. He is cold, cunning, ruthless, and obsessed with destroying Splinter, whom he blames for the death of his true love. Shredder’s thirst for revenge has drained him of all compassion, warmth and connection to humanity.

The Kraang
A race of tentacled alien brain-creatures, the Kraang are inter-dimensional invaders who have come to conquer the planet. Because Earth’s environment is toxic to them, they are forced to live inside robot host bodies. Though they disguise themselves as people, they are often given away by their odd speech patterns and failure to understand human customs. They’re inhumanly strong and tough, and with a host of high-tech intergalactic weapons, they are among the Turtles’ most dangerous foes.

With the release of the new TMNT, there are new Action Figures for your little Turtle fans.

-Each Turtles comes wearing his signature colored bandana and two core Ninja weapons
-These figures are the most highly detailed Turtles ever made, with individual heights ranging from 4.25 inches to 4.75 inches
-As the new show highlights the individual personalities of the brothers, the action figures are uniquely sculpted to reflect the differences in their appearance 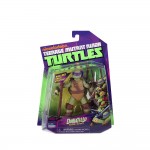 -These Turtles are able to deliver their signature catch phrases and battle sound effects, allowing the show’s scenes to come to life in play
-Each character comes with different sound effects, activated by a simple pull back feature
-Phrases such as “I’m invincible” and “Hiiiiiiii-yaa!” will allow fans to play along with the show and imagine their own scenarios for the heroes

The action figures are very detailed, durable and a ton of fun. They are apparently flying off the shelves, but Toys R US is a supplier.

Remember to check out the new TMNT show on NICK.

I am happy to announce a giveaway of two TMNT Action Figurines. Winner will receive two action figures based on available stock when the giveaway closes. No option to pick your characters or styles. This giveaway is open to residents of Canada who are over the age of 18 and where permitted by local laws to enter and win giveaways. See the bottom of the Rafflecopter Entry Form for all terms and conditions.