Anthony, Greg, Jeff and Murray – The Wiggles – today announced that 2012 would be their final year of touring together and unveiled exciting plans for the future of the world famous children’s entertainment group.
The Wiggles will embark on a Celebration Tour at the end of the month with shows planned for Singapore, the UK, USA, Canada and New Zealand. The group will head home for their final Australian tour in November and December.
Jeff, Murray and Greg will then hand over the purple, red and yellow skivvies to a new generation of performers to instead take on backstage creative roles.

Anthony will continue on stage as the Blue Wiggle alongside Emma Watkins, Lachlan Gillespie, and Simon Pryce, who have been handpicked by the group to become the Yellow, Purple, and Red Wiggles. 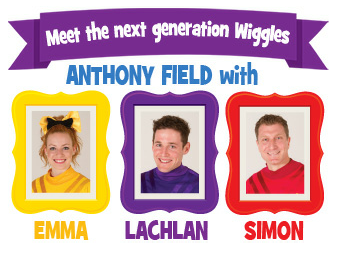 “We’ve been entertaining children around the world for 21 years and it’s important that we plan for the future so that The Wiggles can keep wiggling in the years to come,” said Murray.

“The touring and performing over the past 21 years has meant that we’ve spent a long time away from our own families and friends. We miss them and want to spend more time at home which is a major reason why three of us decided it was time to hand on our skivvies to a new generation.’’

“Singing, dancing and performing for children and their parents around the world has been such great fun-we have been so lucky to do something that we love for so long,” said Greg.

“When The Wiggles asked me to return to the group last year I was excited at the thought of performing with the three guys that I started the group with 21 years ago. With Murray and Jeff’s decision to stop performing at the end of the year it’s a nice sense of closure to also end my time on stage during the final tour with all the original members of the group.”

“It’s been so great having Greg back with us so far this year, and to finish our time on stage all together again seems so fitting,” Jeff said.

“We want to thank all our Wiggly fans– it’s been a great ride in our big red car. We are really looking forward to saying farewell and having one last dance with everyone during the tour.”

Emma, Lachy and Simon will join the original members of The Wiggles ‘on the road’ for their Farewell tour. After that they will pull on the yellow, purple, and red skivvies and join Anthony on stage so that The Wiggles can continue to entertain and delight a new generation of children.

“Lachy, Simon and Emma all have wonderful singing voices and are experienced children’s performers. They have worked with us for several years, playing various characters including Wiggly dancers, Dorothy the Dinosaur, Captain Feathersword and Wags the Dog,” said Anthony.

Emma said it was a huge thrill to become the Yellow Wiggle and the first female skivvy-wearer in the group’s 21-year history aside from Kylie Minogue, who was made an honorary Pink Wiggle in 2009.

“I’ve been a big fan of The Wiggles since I was a little girl, so it’s a huge privilege to be invited to wear one of the skivvies and perform for a whole new generation of children,” she said.

Lachy said he was delighted to be invited to become a Wiggle, having spent nearly three years working with them as part of their touring show.

“Emma, Simon and I can’t wait to get out there in our skivvies next year and continue the fun Anthony, Jeff, Murray and Greg kicked off 21 years ago,” he said.

“We’ll have Anthony’s tremendous experience to tap into onstage and the support of Jeff, Murray and Greg from behind the scenes.”

Simon said he and the team would continue the Wiggles’ commitment to early childhood education.

“We really want to maintain the original philosophy of the group at the same time as we are having lots of fun out there on stage,” he said.

Each year The Wiggles perform for nearly a million people around the world. Since releasing their self-titled album in 1991 the group has wiggled its way to worldwide fame and sold 23 million DVDs and seven million CDs.

Their international popularity led to a host of Gold, Platinum, Double Platinum and Multi-Platinum records, their own TV show and philanthropic achievements including their appointment as UNICEF Goodwill Ambassadors in 2008.

Get you very own The Wiggles coloring sheets —-CLICK HERE—-