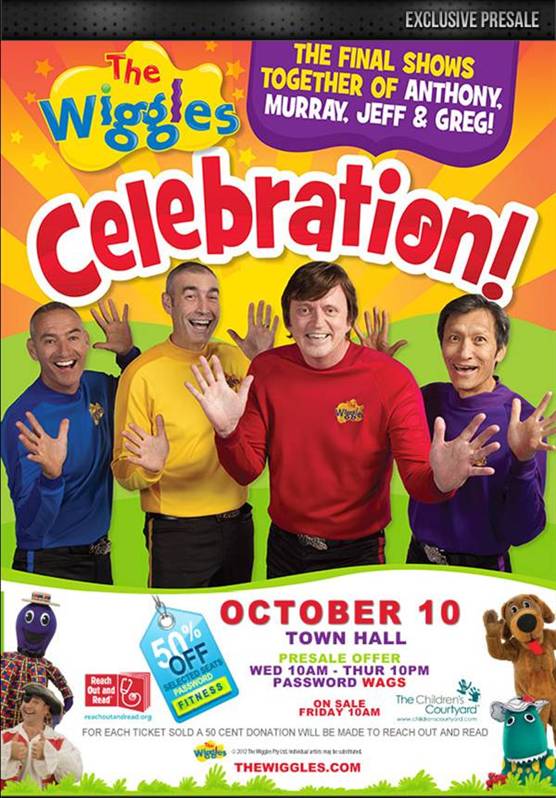 Anthony, Greg, Murray and Jeff Invite YOU To Join Them One Last Time For…

AT TOWN HALL IN NYC

The 2012 Fall Tour Will Be The Last Chance For Fans

To See The Original Fab Four Perform Live On Stage!

TICKETS FOR THE WIGGLES! CELEBRATION TOUR

“(New York, NY) – The Wiggles, the world’s most famous children’s entertainment group, recently announced that 2012 will be the final year of their original lineup. After 21 years of entertaining and educating children around the globe, Red Wiggle Murray Cook, Yellow Wiggle Greg Page and Purple Wiggle Jeff Fatt have decided to hang up their trademark colored jerseys. This year’s fall tour will be the last opportunity for families in New York City to see the Original Fab Four from Down Under perform together. Come Celebrate with Anthony, Greg, Murray, and Jeff at Town Hall on Wednesday, October 10th for two shows at 2:30 PM and 6:30 PM.

The Celebration Tour, which corresponds with the release of their new DVD and CD, “The Wiggles Big Birthday,” will honor over two decades of Wiggly singing, dancing, and performances for children and their parents. Beginning in 2013, The Wiggles will launch a new lineup that will usher in an exciting new era for future generations of children to continue to delight in the Wiggles unique brand of music, fun and learning. The group’s founder, Blue Wiggle Anthony Field, will be joined on stage by Lachlan Gillespie, Simon Pryce, and the first-ever female Wiggle, Emma Watkins, who have been handpicked by the group to become the Purple, Red and Yellow Wiggles.

Tickets for NYC go on sale to the general public on Friday, August 24th at 10:00 AM and are available through all Ticketmaster locations (www.ticketmaster.com) or by calling (800) 745-3000 and the venue box office. Prices range from $39.00 – $85.00 (additional facility fees, service charges and $.50 donation to Reach Out and Read may apply). $85.00 tickets in the Wiggles VIP section are limited, and will include the best seats in the house, an exclusive gift, an activity sheet and your last chance to dance along with The Original Wiggles themselves!

Come and wiggle in the aisles for The Celebration Tour! Audience participation features include:

· Start the fun at home by creating a giant wiggly sign.

· Having fun with your favorite wiggly pal as they sing and dance through the audience.

· Dress up as your favorite character.

Children can have even more wiggly fun while they wait for the show by visiting www.WiggleTime.com, The Wiggles’ very own virtual world created specifically for preschoolers and their parents. Parents can monitor their child’s progress and have access to premium promotional offers, contests, merchandise discounts and presale Wiggles tickets! You can also follow the gang on Twitter via Twitter.com/ItsWiggleTime or become a fan of the group’s official Facebook page Facebook.com/TheWiggles.

Reach Out and Read doctors and nurses serve more than 4 million children and their families annually at 4,946 pediatric practices, hospitals, clinics and health centers in all 50 states. In New York, 285 hospitals and clinics participate in Reach Out and Read, serving 330,275 children annually. Parents who participate in the evidence-based program read to their children more often, and their children enter kindergarten with larger vocabularies and a six-month developmental edge. A portion of the proceeds from all ticket sales will be used to support Reach Out and Read programs across the United States.

The Wiggles, the world’s #1 preschool entertainers, performed over 350 shows to more than 1.5 million fans since 2005 in the United States alone. The Wiggles perform over 200 shows annually across four continents. The Wiggles are seen on TV in over 120 countries worldwide. Fans can catch The Wiggles on television exclusively in the U.S. on 24-hour preschool network Sprout as hosts of Sprout’s Wiggly Waffle, which airs every weekday morning from 6:00 – 9:00 a.m. ET. Beginning July 7, 2012, fans can also watch The Wiggles on NBC’s new Saturday morning preschool block, NBC Kids. The Wiggles have sold more than 23 million DVDs and videos, 7 million CDs and 8 million books in the United States, Canada, United Kingdom, Australia and New Zealand. You can also follow the gang on Twitter via Twitter.com/ItsWiggleTime or become a fan of their official Facebook page Facebook.com/TheWiggles.

About Reach Out and Read

Reach Out and Read is an evidence-based, national nonprofit organization that promotes early literacy and school readiness by giving new books to children and critical advice to parents about the importance of reading aloud at regular pediatric checkups. The program begins at the 6-month checkup and continues through age 5, with a special emphasis on children growing up in low-income communities. Along with the free book for every child, doctors and nurses also provide guidance to the parents about the importance of reading aloud with their children every day. The research proves that families served by Reach Out and Read read together more often, and their children enter kindergarten with larger vocabularies, stronger language skills, and a six-month developmental edge over their peers. Nationwide, Reach Out and Read doctors and nurses serve more than 4 million children and their families annually at 4,946 pediatric practices, hospitals, clinics, and health centers in all 50 states. To learn more, visit www.reachoutandread.org. Find us on Facebook at www.facebook.com/reachoutandread and follow us on Twitter @reachoutandread.”