Introducing children as young as 5 to the fascinating world of science is as close as the kitchen cupboard. Everyday items like salt and sugar and baking soda become ingredients for thought-provoking science experiments. The Young Scientists Club, makers of entertaining, informative kits, suggests crystallizing a lifelong love with science with their newest offering, The Magic School Bus™ Growing Crazy Crystals ($19.99).

Phoebe, Ralphie, Arnold and Wanda, beloved characters who ride The Magic School Bus, guide youngsters on
a multi-day journey to observing crystals. Spending just a few minutes a day, Phoebe has an experiment for
rock candy; Arnold shows young scientists how to make a crystal star while Ralphie leads an experiment on salt
crystals. Ms. Frizzle, their eccentric third grade teacher, spearheads all of the crystal capers in this colorful kit that includes an observation chart, tweezers, brushes, magnifying glass, petri dishes, measuring cup and much
more.

These simple at-home experiments, spelled out in a delightful instruction booklet, introduce elementary schoolaged
children to basic concepts in chemistry, physics, geology and mathematics! Plus their home-grown crystals
are beautiful. Young scientists will discover that creating crystals are as much art as they are science. As Ms. Frizzle often says, “dynamic deduction.” 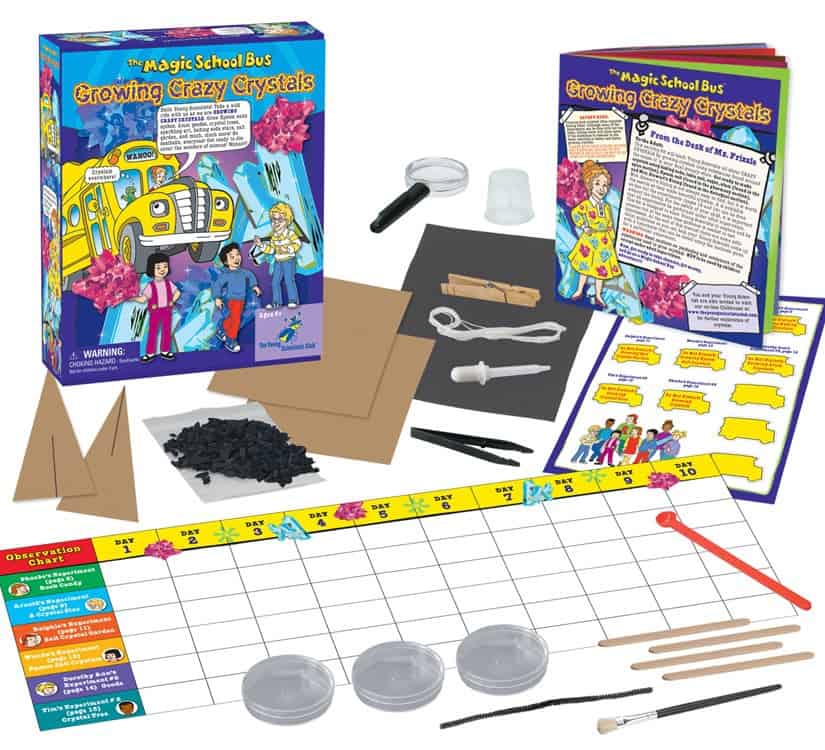 ABOUT THE MAGIC SCHOOL BUS

Based on the best-selling Scholastic book series The Magic
School Bus is an award-winning animated TV series sold to more than 30 countries in 15 languages. With 58 million books in print, the brand has won many industry awards, including two Emmys for Lily Tomlin’s portrayal of Ms. Frizzle in the TV series, five CINE Golden Eagles, a Parents Choice Gold Medal, a National Conservation Achievement Award, an Environmental Media Association Award, and an Annenberg Public Policy Center Award. In celebration of its 25th Anniversary, Scholastic debuted two new iPad apps and a new game for Nintendo DS. For more info about The Magic School Bus, visit www.scholastic.com/magicschoolbus.

Scholastic Corporation is the world’s largest publisher and distributor of children’s books and a leader in
educational technology and children’s media. Since 1920, Scholastic has been creating quality educational and
entertaining materials and products for use in school and at home. Today they include children’s books,
magazines, technology-based products, teacher materials, television programming, film, videos and toys.
Scholastic distributes its products and services through a variety of channels, including proprietary school-based
book clubs and school-based book fairs, retail stores, schools, libraries, television networks and
www.scholastic.com.

ABOUT THE YOUNG SCIENTISTS CLUB

Esther Novis, a mother of five and a former Harvard-trained biologist started The Young Scientists Club as a
summer science camp for her then 5-year-old son. Friends from other parts of the country told Novis they
wanted to duplicate her concept and the idea for a science subscription service was born! The subscription kits
are now mailed monthly to thousands of children around the world and the company’s retail kits are sold in
hundreds of specialty stores. In addition to developing new products for The Young Scientists Club, this wise
mom has many years of experience teaching at Phillips Academy, Andover and has written the science column
for Parents Magazine plus wrote science experiments for the new science curriculum by McGraw-Hill
Publishing.

So school is ending and summer time is just around the corner…… What type of activities are you planning this summer to keep your little one’s mind working and learning?

I recommend that you check out The Magic School Bus Growing Crazy Crystals set.

Here are things that I love about the Growing Crazy Crystals Set:

*A ton of experiments with the instructions provided from growing Salt Crystal Garden with Ralphie, Growing Rock Candy with Phoebe, to growing a Crystal Tree with Tim, and much more.
*All instructions are in the booklet provided and the booklet is colorful and well done.
*There are yellow school bus stickers with each project’s name on it say “Do Not Distruct Growing…and then the project name.” Love these because it helps you remember what each project is and is tied in to the theme of the kit.
*Includes a 10 day observation chart to make notes.
*Comes with an adorable little magnifying glass.
*Comes with three petri dishes.
*Instructions are well written out and easy to follow.
*Your little scientist just needs things from around the home that are easy to find, like salt and sugar, to go the experiments.
*Some experiments lead into the next like Tim’s Experiment #1 of making sugar crystals is to be followed with Phoebe’s Experiment #1 of making rock candy.
*Super fun way of learning science and doing experiments.

I do not have grown crystals to show you yet and I think that the following video gives a great depiction of the type of science your young scientists will do with their Growing Crystals Set.

When we have great shots of our crystals, I will add them to this review so you can check out the finished product.

In the meantime, if you want to check out more about Growing Crazy Crystals and the other awesome products from The Young Scientists Club, check out the following links.

Disclosure: MomMomOnTheGo was provided product for the purpose of conducting this review.