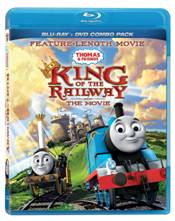 It’s The Royal Event Of The Year With Thomas & Friends® In This All-New Epic Movie Adventure!
THOMAS & FRIENDS:
KING OF THE RAILWAY- THE MOVIE
Available On Blu-Ray/DVD Combo Pack, DVD, Digital Download And Video On Demand September 17

It’s Full Steam Ahead on the Island of Sodor with Thomas and his engine friends in the all-new CG animated movie Thomas & Friends®: King of the Railway coming to Blu-Ray/DVD Combo Pack, DVD, Digital Download and Video on Demand September 17 from Lionsgate and HIT Entertainment. King of the Railway – The Movie introduces four new engines and one new destination on the Island of Sodor. New engine Stephen is based on the legendary “Stephenson’s Rocket”, one of the fastest and most advanced steam locomotives of its day. Meet the Earl of Sodor and see how Thomas and the Steam Team rely on friendship and cooperation to avoid disaster and save the day!

Join Thomas & Friends as they embark on a legendary movie adventure! The steam team’s quest begins when a special guest arrives on Sodor with a big surprise and important jobs for Thomas, Percy and James. The engines meet new friends and discover suits of armor; coats of arms and legends of long-ago heroes. Then their bravery is put to the test when their new friend Stephen goes missing. Will Thomas find him in time? Will the engines discover the truth about the Island of Sodor’s biggest mystery? It’s a crusade of knightly proportions for Thomas & Friends in this epic movie!

· The Search for the Lost Crown Game

King of the Railway is the biggest Thomas & Friends DVD program of the year, supported by a multi-pronged marketing campaign that includes themed toys and train sets from Fisher-Price, a related mobile and tablet app set for global release in 2013 and best-in-class partners across the globe including Mega Brands, Ravensburger, Random House and Egmont. Fisher-Price will cross-promote King of the Railway DVD content and the related toys through TV advertising and on-package promotions. A dedicated King of the Railway online destination on ThomasandFriends.com that is desktop, tablet and smartphone compatible will launch in July 2013. This site features an interactive map of the Island of Sodor and will introduce King of the Railway characters and destinations. There will also be three new interactive games. Collectible character badges will be hidden within the site and upon collection, fans will be able to share the badges on Facebook and Twitter. Lastly, there will be global Blue Carpet Premiere events held in London, Los Angeles, Toronto and Mexico timed to the DVD release.

Thomas the Tank Engine™ was created by a father for his son nearly 70 years ago and today is enjoyed by families in more than 185 territories and in 30 languages. The #1 blue engine and his friends invite children to enter a world of imagination through the tracks of a train and the words of a story. Children embark on adventures with their engine friends while experiencing timeless life lessons of discovery, friendship and cooperation.