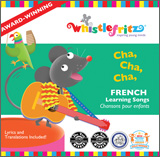 MomMomOnTheGo’s Little One is in French Immersion and we are always looking for great resources for continuing the French Language learning while at home. What I look for in a French learning resource is something that is level appropriate and fun. It is so easy to keep your kids learning when they are having fun.

Recently, MomMomOnTheGo came across Whistlefritz. Whistlefritz specializes in language learning and has a number of resources for French and Spanish.

MomMomOnTheGo and family have been enjoying Whistlefritz Cha, Cha, Cha which is a CD of 15 full length French songs.

Parlez-vous cha, cha, cha? From samba and merengue to rhumba and reggae, irresistible world music rhythms add an exciting twist to learning French with this spirited 15-song collection. Performed by acclaimed singer Lynn Véronneau and set to a diverse array of Latin and Caribbean rhythms by versatile bandleader and composer Didier Prossaird, Cha, Cha, Cha will get children on their feet singing and dancing along to zesty arrangements of beloved traditional songs (Bingo, Sur le Pont D’Avignon, Les Éléphants, Tombe La Pluie) and lively originals that teach about numbers, the days of the week, the months, the seasons, and more. This wildly fun collection makes learning to speak French as easy and natural as un, deux, trois. A song-by song translation guide is included as an easy reference guide for parents and teachers.

Cha, Cha, Cha has very catchy and familiar songs. The songs are fun to sing along with. Don’t worry if you do not know a word or two as Cha, Cha, Cha comes with the words to all the songs written on the booklet inside the CD. So when your Little One needs to know a word, you have a resource at your fingertips to help them and even you out. 🙂 You can also get the words to the songs off the Whistlefritz website.

If you want to check out the CD before you buy, you can listen to excerpts of the CD on the Whistlefritz website. Check out some of the familiar songs you might know such as Bingo and Sur Le Pont D’Avignon.

Didier Prossaird
Didier Prossaird’s irresistible music is as unique as his background. The versatile bandleader, performer, and composer was born in Saint Denis, France, and grew up in Paris before moving to Saint Barth’s in the Caribbean, where he performed with many Island bands. Didier moved to the Washington, D.C. area in 1995 where he created the acclaimed salsa band Sin Miedo.

Whistlefritz Cha, Cha, Cha is an upbeat, fun CD that helps keep your Little One thinking, singing and learning in French. Whistlefritz is a great resource for continuing French language learning and use beyond the classroom. We love our Cha, Cha, Cha CD and listen to it all the time.

You can stay connected with Whistlefritz on their Facebook Page.

Disclaimer: MomMomOnTheGo was provided product for the purpose of conducting this review. As always, MomMomOnTheGo only supports companies and products that she loves. All opinions are those of MomMomOnTheGo.