If you yelled out SpongeBob SquarePants when you read the title and started humming then you are familiar with the Bikini Bottom characters. Don’t worry, the theme song is now stuck in my head as well. It is one of those catchy little tunes that you can find yourself singing over and over again quite easily. Everything from Bikini Bottom’s characters, to the humorous story lines and the music itself makes SpongeBob SquarePants entertaining.

I have an awesome product that I want to tell you about that helps tune into children’s creativity and imagination playtime through characters they know and love. A partnership between Lego and Nickelodeon has brought about a SpongeBob Bikini Bottom Undersea Party playset that contains 471 pieces of pure Bikini Bottom playtime and entertainment. 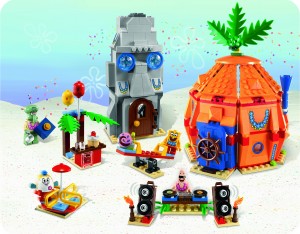 The LEGO SpongeBob Bikini Bottom Undersea Party building playset contains 471 pieces and is recommended for children between the ages of 6 and 11.

Now that most kids will be getting out of school for the summer, sets like this one can be great for encouraging imaginative play, and as with other Lego products, motor skills development in younger children as well.

SpongeBob is throwing a huge party and everyone is invited! While Patrick is at the turntable spinning his favorite tunes and Squidward mans the juice bar, SpongeBob is getting silly by catapulting the party cake at Mrs. Puff! 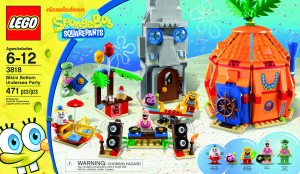 When we received out Lego SpongeBob Bikini Bottom Undersea Party playset our girls 5 and 10 were so excited. They immediately opened the box and had me taking all 471 pieces out so that they could build it right away. All I heard was “I will build SpongeBob. I will build Squidward.” For over an hour and a half straight, my two girls sat and built Bikini Bottom together. My 5 year old did need help with building the set, but keep in mind that the set is recommended for ages 6 to 11.

My 5 year old was able to build some parts on her own, but it was a perfect activity for her to do along side her 10 year old sister. It was nice to see them sitting with a common interest and helping each other out. It was also fun to see them using their imagination once they had successfully built up Bikini Bottom from the bottom up.

I absolutely love products such as Lego that help develop children’s motor skills and also tap into imaginative play. I love my girls playing with these type of toys and there is no doubt that this Lego SpongeBob Bikini Bottom Undersea Party playset is awesome in every way. Great quality, great characters and an overall amazing toy. I have no problem recommending this set for your SpongeBob or Lego fan.

What is absolutely wonderful is that one lucky MomMomOnTheGo fan is going to be the winner of their very own 471 piece, Lego SpongeBob Bikini Bottom Undersea Party playset. This contest is open to residents of Canada who are over the age of 18 and where it is permitted by local laws to enter and win giveaways.

Disclosure – MomMomOnTheGo was provided one Lego SpongeBob Bikini Bottom Undersea Party playset in order to conduct this review. The opinions within this post are those of MomMomOnTheGo and are based on actual playtime witnesses by MomMomOnTheGo of the set with her children.