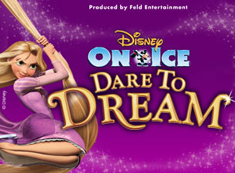 Last night my entire family went to see Disney on Ice presents Dare to Dream produced by Feld Entertainment at the Rogers Centre in Toronto.

My 4 year old, who once she found out we were going, had been talking about it for a week, she even dressed the part by wearing her princess dress and crown with Goldilocks hair as did many of the other girls watching the performance.

The minute you entered the Roger’s stadium you realized you were at a Disney production, with stands set up everywhere, to the Disney music playing in the background. Prices for merchandise were quite high. Cotton candy with a foam crown was $12, as well as snow cones in a take home cup. Many parents were talking about the high prices, but the grandparents were busy buying everything up for their grandkids.

The setup was such that it appeared that everyone had an unimpeded view of the show. The small venue proved to provide a nice intimate setting.

As soon as the lights dimmed, you could hear cheers from all the children.

The show began with Mickey and the gang presenting us with the story of The Princess and the Frog. The costumes entranced the children right from the get go, as did the singing and skating. The only negative comment I would have about this section is that The Princess and the Frog was a little long and drawn out for the children. It seemed a bit scary at times too, with the music and lights. As well Tiana was in frog form for most of the story and you could hear children asking where the princess was.

The next story to be told was the classic Cinderella. When the horses and carriage came out for Cinderella’s scene to go to the ball you could hear the gasps from the children, however it was the last act of the Tangled story that stole the show. From the first scene where Flynn begins by stealing the tiara by the use of wires and pulling him high above the stage, to the horse Maximus who skated around. I liked that they used the audio from the movies so the children really knew what was about to happen and could sing along. This story also seemed to interest my son the most as it had a little more action then the previous two stories, with the best aerial acrobatics. The end scene with the floating lanterns totally had the children entranced.

At the very end, they did bring all the Disney princesses out, and my daughter was excited that she got to see Aurora finally. It would have been nice if they could have incorporated the other princesses a little more!

The show as a whole was very well done by the actors, and their skating abilities were wonderful and both my children loved it! They of course want to go back again when the show comes to town next March Break. Seeing my 4 year old daughter’s face beam through the entire show was entirely worth the cost. Even my 6 year old son seemed to enjoy himself. Definitely worth the price of admission.

Make sure to keep up to date on Disney On Ice Dare to Dream by following them on Facebook.

Here is how the Rogers Centre describes Disney On Ice Dare to Dream:

Get tangled up in the newest, thrilling show to hit the ice! Disney On Ice presents Dare to Dream at Rogers Centre this March, 2012.

Experience Disney’s hilarious hair-raising, new escapade Tangled as it takes to the ice. Follow Rapunzel, her unlikely companion Flynn, and Maximus while they embark on an uproarious journey that takes adventure to new lengths!

Boogie to the beat of the bayou with Princess Tiana and Prince Naveen from The Princess and the Frog, in a magical, musical journey that begins with a fateful kiss.

And fanciful dreams become reality as Cinderella meets her Prince Charming, with a glass slipper fit for an unforgettable fantasy come true.

Experience the beauty, sparkle, and spirit when all of your favorite princesses take to the ice in a spectacular finale at the ultimate Disney Princess event!