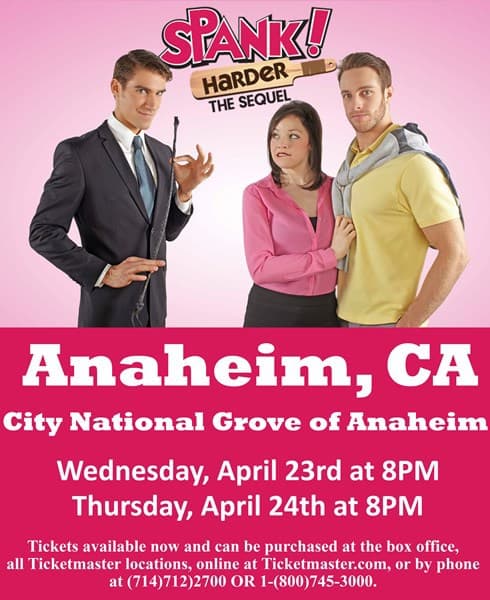 THE HIGHLY ANTICIPATED SEQUEL TO SPANK!
COMES TO CITY NATIONAL GROVE OF ANAHEIM

The country’s #1 ladies night out returns with an all-new sexy and satirical show! The phenomenon of SPANK! THE FIFTY SHADES PARODY took the world by storm in 2013, delivering a night of naughty and hilarious fun to women in over 160 cities across the globe. Your cheeks will hurt with laughter as SPANK! HARDER picks up where the original left off, parodying not only “Fifty Shades of Grey”, but taking aim at a variety of pop culture that is begging to be SPANK’D!

Wife, mother, and senior account manager E.B. Janet embarks on her second novel, taking audiences on a hysterical, fantasy adventure where anything can – and does – happen. A precarious love triangle? Yes. Drop dead gorgeous male characters? You bet. Whether you are looking for a perfect date night to spice things up, or gathering the girls for some laugh-out-loud fun, we’ve got the show for you. Arrive early for special show-themed cocktails, and stay afterwards for photos with the cast. It’s time to get SPANK’D.. this time Harder! www.spankshow.com

Audiences and critics alike responded to SPANK! THE FIFTY SHADES PARODY in 2013 making the show the #1 theatrical parody in the world with over 10 million dollars in ticket sales.

SPANK! THE FIFTY SHADES PARODY and SPANK! HARDER are not associated with, nor authorized by, author E.L. James or Vintage Press.

Enter for a chance to win two tickets to Spank! Harder the Sequel opening night on April 23rd, 2014 at 8 pm in Anaheim. This giveaway is open to residents of the USA who are over the age of 18 and where permitted by local laws to enter and win giveaways. Please note that the prize is for tickets only and does not include transportation or any other costs associated to attending the show. Please ensure that you read all terms and conditions found at the bottom of the entry form.