MomMomOnTheGo and crew recently went to see Disney Live Mickey’s Rockin Road Show in Vancouver, BC. We have seen Disney On Ice, but we have never been to a Disney Live show. We were all pretty excited to be going to the show.

To explain just how excited we were about Disney Live, I need to tell you about our day before the show. My Little One woke with 104 degree fever. Days earlier I was just getting out of the hospital and still sick. When I looked at my Little One and said “Babydoll, I am not sure we can make the show tonight.” The tears just filled her eyes and my heart broke. We had a doctor’s appointment to go to and I figured that my Little One might need to hear from the doctor that the show is off for us.

So off to the doctor we went, fever now breaking, and the doctor said to play it by ear and if the fever was gone, then the show was a go. All a last minute thing. What did my Little One hear from that……we are going. So home we went for a long nap.

Well, the fever broke and so we got ready to see Disney Live for the first time ever.

Disney Live was very energetic. Right from the entrance of the hosts to the finale, the audience was participating, laughing, clapping and cheering. The show included something for every Disney fan. There was a princess, Cinderella, Mickey and Minnie of course, Goofy, Donald, Buzz, Woody and Tigger bounced in there as well. There are a few other characters that make an appearance as well to help round out the show.

One of my favorite part of the shows is when Tigger appears. 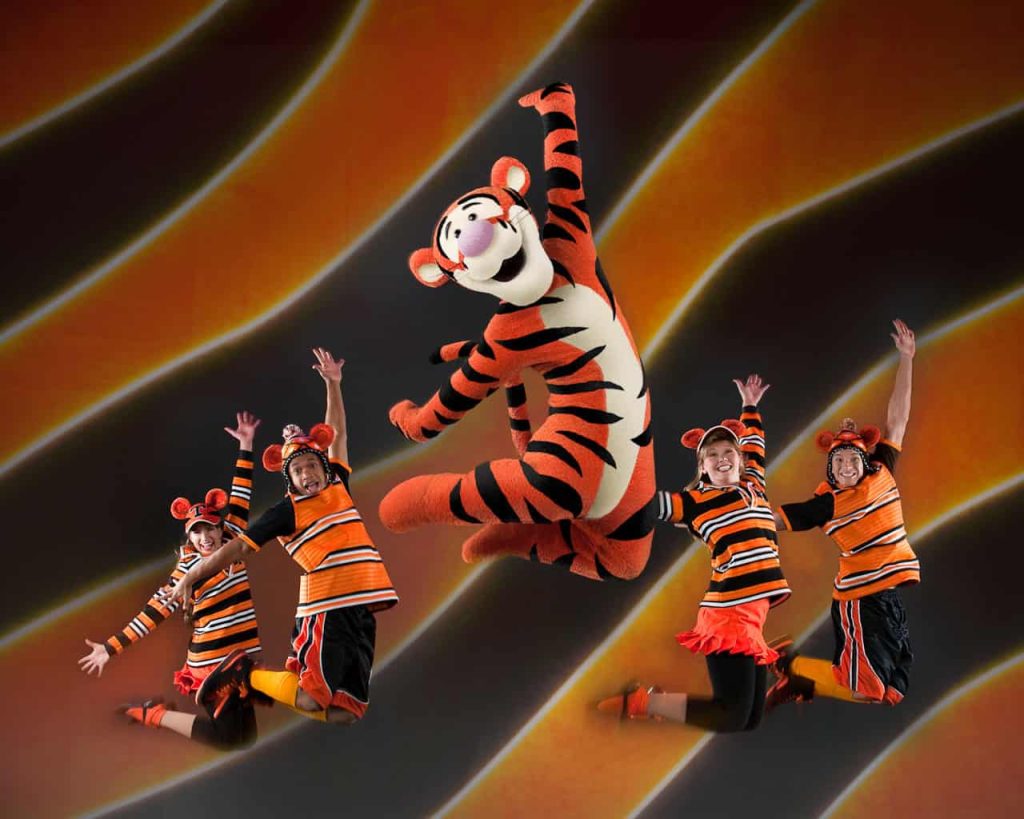 I could go on and on about the show. Here are the things that really stood out to me…….

*I have never seen a show use the background so perfectly to enhance the show. Right from the car riding the road, to the characters becoming live features on the background. You have to see it to know what I mean, but pay attention to the use of the background if you are off to see the show.

*The special effects of course were awesome. They may have been on a smaller scale than a larger production, but how Cinderella’s dress magically becomes sparkly without the kids noticing how, is an example of awesome effects in the show.

*The way they made the Fairy Godmother appear to be floating on the stage by simply using what I think might have been Heelys. It is the attention that Disney puts into those little things that make their shows amazing.

*I loved how they moved the stage up to the center of the rink/venue to ensure that all seats in the house were awesome. This to me spoke loudly that Disney cares about the quality of their show more than simply the earnings from it. There is no sacrificing quality! I love it.

As with other live shows, the cost for the souvenirs is quite a bit. It is not more than any other live show though. i always account for a little extra for a special souvenir since after all, the shows only come once a year if you are lucky and it is Disney!

When your family is under the weather, but they do not notice it for the duration of the show, you know that the show is amazing. For the hour and a half that we were enjoying Disney Live, we all forgot about our fevers and sniffles. It was all laughs and cheers coming from us.

My Little One who is 6 years old said she would recommend the show for sure. She also asked when it was coming again because she wants to go again. I love Disney and I can say that I never have not recommended one of their shows. Disney knows how to entertain and they did not let the crowd down with Disney Live.

Disclosure: MomMomOnTheGo was provided tickets for the purpose of conducting this review. As always, MomMomOnTheGo only supports companies and products that she loves.