Disney Consumer Products, in collaboration with Hasbro, Inc., introduces PLAYMATION – the next step in the evolution of play, where digital gets physical and imagination becomes real. The groundbreaking system of toys and wearables uses smart technology to inspire kids to run around and use their imaginations, as they become the hero or heroine of stories from across The Walt Disney Company, including MARVEL’S AVENGERS in 2015.

PLAYMATION MARVEL’S AVENGERS uses familiar technologies including wireless technology, motion sensors and more,
but applies them in ways that are new to create an experience that’s never been before. With multiplayer modes,
recruits can sync their Avenger Gear to tackle missions and combat arenas together, or face off in competitive play. The free to download AvengersNet app, available at launch, enables players to register Avenger Gear to see progress, explore additional locations and characters, and get access to new missions.

(Ages 6 years &up/Approx. Retail Price: $119.99/Available: October 2015/SKU: B1074) Enter the world of Marvel’s Avengers with the PLAYMATION MARVEL’S AVENGERS STARTER PACK. STARTER PACK includes Repulsor Gear, two Power Activators, CAPTAIN AMERICA SMART FIGURE and IRON SKULL SMART FIGURE. Four locations and 25 missions are playable out of the box, with additional locations and missions available through the free to download AvengersNet app. To get started, simply strap the Repulsor Gear onto your arm and listen closely to JARVIS as he instructs how to control your new Gear. The Repulsor features motion sensing technology, three modes of attack, and sync button to collaborate or compete with other recruits, and connect to the app. Power Activators bring characters into play as well as acting as dozens of different enemies, they feature lights and sound, and can be used as a blaster for multiplayer battling. Team up with the CAPTAIN AMERICA SMART FIGURE to level up and earn new abilities. Battling the IRON SKULL SMART FIGURE unlocks new location and mission. Available at mass and specialty retailers nationwide select Disney Store locations and at DisneyStore.com. 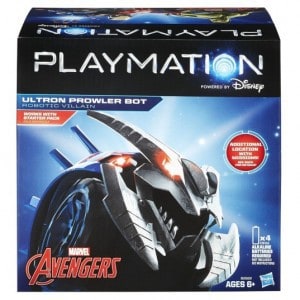 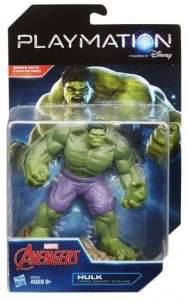 (Ages 6 years & up/Approx. Retail Price: $19.99/Available: October2015/SKU: ASST OF ITEM NUMBERS)
For battlefield back-up, call on PLAYMATION MARVEL’S AVENGERS HERO SMART FIGURES. Players load a HERO SMART
FIGURE onto a Power Activator (sold separately with in Starter Pack) to bring them into battle. Each figure has two
attacks to help in battles and allows players to earn a unique ability once they level up. Check in with the AvengersNet app for mission updates and messages. HERO SMART FIGURE characters include: Iron Man, Hulk, Captain America, Black Widow, Falcon, Hawkeye, Hulk Buster and Vision. Each sold separately. Available at mass and specialty retailers nationwide, select Disney Store locations and at DisneyStore.com. 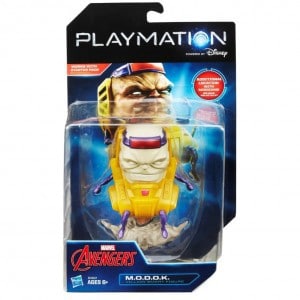 (Ages 6 years & up/Approx. Retail Price: $19.99/Available: October 2015/SKU: ASST OF ITEM NUMBERS)
PLAYMATION MARVEL’S AVENGERS VILLAIN SMART FIGURES are doing ULTRON’s dirty work! Players load a VILLAIN
SMART FIGURE onto a Power Activator (sold separately within Starter Pack) to bring them into battle. Each VILLAIN
SMART FIGURE comes equipped with two attacks to use against you in battle. Defeating their opponent allows players
to level-up and gain a new ability to use in battle. Each figure also unlocks a location with additional missions via AvengersNet app. Each sold separately. VILLAINSMART FIGURE characters include: Ultron Bot, Super Adaptoid and
M.O.D.O.K. Each sold separately.

About Hasbro, Inc.
Hasbro, Inc. (NASDAQ: HAS) is a branded play company providing children and families around the world with a widerange of immersive entertainment offerings based on the Company’s world class brand portfolio. From toys and games, to television programming, motion pictures, video games and a comprehensive licensing program, Hasbro strives to delight its customers through the strategic leveraging of well-known and beloved brands such as TRANSFORMERS, LITTLEST PET SHOP, NERF, PLAYSKOOL, MY LITTLE PONY, G.I. JOE, MAGIC: THE GATHERING and MONOPOLY. Come see how we inspire play through our brands at www.hasbro.ca. © 2015 Hasbro, Inc. All Rights Reserved.

I have to admit that I think I was just as excited about Playmation when I heard about it as the kids were. Playmation is like playing make believe but taking it to the next level.

Check out this video so you get a better idea of what to expect with Playmation….

Imagine be connected to an app via wearable smart gear and getting to be the superhero. I know, I get excited by it. If you love superheroes as much as we do in our house, then you will love Playmation.

Let’s talk about what you get in the starter kit because you have to start out your Playmation experience with the purchase of a starter kit….

In the Playmation Starter Kit is:

If your kids have a friend with Playmation they can sync their gear and play together. This is an awesome option that has kids engaging in active role playing of their favorite heroes while encompassing the video game aspect in with it. It is a wonderful and winning combination.

I have not had a chance to play the multiplayer mode, but it looks like it would be awesome. I could imagine my Little One and a friend running around on missions as their favorite superheroes, saving the world.

The Avengersnet App is what keeps track of the missions. You can also download more missions via the app. The app is where you receive your messages from the Avengers as well.

As with similar products, you can grow your Playmation experience and collection by purchasing additional characters for the set. Both heroes and villains are available for purchase. I want to add Black Widow to our collection. 🙂

The key to you being a part of the Playmation world is through the repulsor that you strap on.

STRAP ON THE REPULSOR AND ENTER THE ACTION.

> Communicate with JARVIS and Iron Man himself.
> Enter the action with 25 pre-loaded missions that will take you from New York to Wakanda and back.
> Control the battle with motion-sensing technology that responds to your movement.
> Block, dodge, sneak, run and jump–you’ve got to move to win.

The wonderful thing about Playmation other than everything about it, is that they have a ton of videos to help you out with everything you could imagine. Make sure to visit the Playmation YouTube channel to get more tips and tricks for Playmation.

Honestly I think Playmation sells itself. It is the perfect combination of engaging kinds in “traditional” make believe play and more current gaming play that kids love.

I have read many reviews on Playmation so far and the reviews rave about how awesome Playmation is. I agree and recommend that you check out Playmation this holiday season as it will undoubtedly be on many wish lists and a hot item that will fly off the shelves.

To check out more about Playmation make sure to visit here…

Disclosure: MomMomOnTheGo was provided product for the purpose of conducting this review. As always, MomMomOnTheGo only supports companies products and services that she loves.