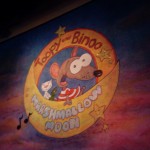 We had amazing seats considering the theater we were in. We were second row, right on the aisle. The show was at The Centre for Performing Arts in Vancouver and honestly my personal opinion of the venue itself is that the seats do not angle back enough for them to host shows for children.

The show itself was amazing. Our little one could not stop grinning from ear to ear right from the start to the end of the show.

The best thing about Marshmallow Moon was that they encompassed so many characters from various episodes into the show. They had Dusteroos, the toy box monster with his six eyes, the sheep and even the cats. I could not remember which episode the cats were from, but my daughter quickly told me, “they are from puzzle world mom.”

You also cannot forget Mrs Octopus. Mrs Octopus starts off the show and builds the anticipation of when and where Toppy & Binoo will show up.

Koba Entertainment definitely hit the mark so to speak with their Toopy & Binoo debut show. There was tons of singing and a lot of laughs including of course that Toopy laugh we have all come to know.

To sum the entire show up, our daughter was mesmerized from start to finish. We saw the show 5 days ago and she is still talking about it.

As far as the merchandise for sale at the show; you can purchase t-shirts, the latest Toopy & Binoo dvd which is called “The Best of Toopy & Binoo,” a wonderful magic light wand and the Toopy & Binoo plush doll that have been so hard to find.

I am not sure if this is the case at every venue or just unique to the Vancouver show, but it is very important to know that they take cash only. So if you are going to buy any souvenirs, then make sure you bring cash. The Toopy & Binoo plush doll was $35, the light up wand was $10. T-shirts I believe were $15.

The souvenirs were very popular with them running out of Toopy & Binoo plush dolls before the show started. Luckily they had more stock and got them ready for the intermission and after the show.

Advice to The Centre for Performing Arts would be to at least put signs up that you accept cash only. People waited in long line-ups to find out they needed cash and had to go use the ATM and line up again. The venue also ran out of change. Everyone was getting $20 bills from the ATM and the Centre for Performing Arts staff at the souvenir stands were trying to find people who had $5 bills and $10 bills so they could buy their merchandise and in turn the staff would have change for those with $20 bills. It was chaos!

Luckily I am an honest person or I actually could have walked away with my souvenirs I wanted without paying. The staff at the souvenir stand were overwhelmed to say the least and were loosing track of what they were doing.

All the venue issues though did not take away from the fact that Toopy & Binoo Marshmallow Moon was an amazing show that kept the kids entertained from start to finish.

Congratulations to our winner of the Vancouver Toopy & Binoo Marshmallow Moon contest. They received a family of four tickets. When I asked them about the show they replied “The kids loved the show! Thank you so much for the tickets.”

If you read the reviews on Ticketmaster, there are a number of complaints but they are similar in nature;

To address these issues; yes please do not be cash only. I think that any show no matter what it is that is longer than 30-45 minutes is too long for a two year old. Finally, the show is not for adults. If the show was written for adults then the complaint would be that it was no geared towards children. No win situation there. Keep in mind that as the parent you are there to enjoy the show through your child’s eyes. 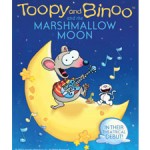 Here is a little sample of the show.