With 2016 being a leap year, the Vancouver Aquarium is celebrating the wonderful world of frogs and has launched a special edition Aquadopt Kit. 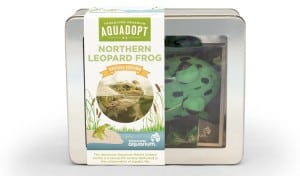 Right now, frogs are a mass extinction. More than 2,000 species could be wiped out within the next few decades – and frogs are among the most endangered of all. The Vancouver Aquarium is a part of Amphibian Ark – a worldwide effort to conserve frogs and other amphibians through breeding programs at accredited aquariums and zoos. You might be aware that we currently breed three critically threatened species: Oregon spotted frog, northern leopard frog and Panamanian golden frog. Last year, our team released 4,200 Oregon spotted and northern leopard frog tadpoles back to the wild to help bolster those populations.

This leap year, we’re raising awareness of these important animals with a new way to symbolically adopt a frog. The northern leopard frog Aquadopt Kit costs $65 (plus shipping) and includes:

· $50 Charitable Tax Receipt (for the purchaser)

For more information or to purchase an Aquadopt Kit visit the Vancouver Aquarium HERE.