The award-winning Stars on Ice Tour is known around the world for its extraordinary skaters and unparalleled performances. Following this tradition, for the first time, four-time World Champion Kurt Browning brings his directing talents to the tour promising innovative choreography, great music, stunning costumes and skating superstars as they have never been seen before! Featuring a cast of Olympic, World and National champions that includes Kurt, Tessa Virtue & Scott Moir, Joannie Rochette, Jeffrey Buttle and more, this all-new production of Stars on Ice is one you won’t want to miss!

I know that after reading just that little about this years Stars on Ice and seeing that clip that you want to know who the stars are and where the show will be touring. Let’s start with seeing if Stars on Ice is coming to a City near you. 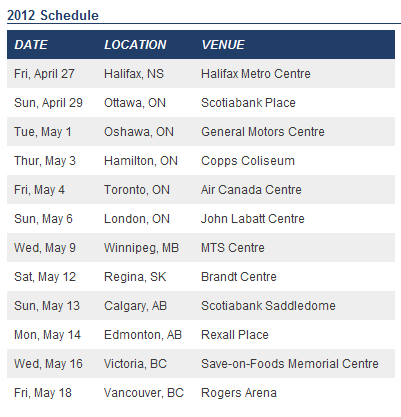 I am so excited again this year about Stars on Ice. We saw Stars on Ice last year and the show was breathtaking. I am even more excited this year, if that is even possible, because of the directing debut of Kurt Browning in this years show. I have always thoroughly enjoyed the extra special passion and skating of Kurt Browning. 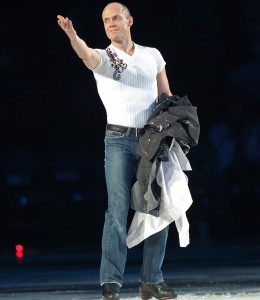 There are a lot of amazing skaters in this years Stars on Ice as always. Who are you most excited to see this year? Check out this years line up of amazing stars. 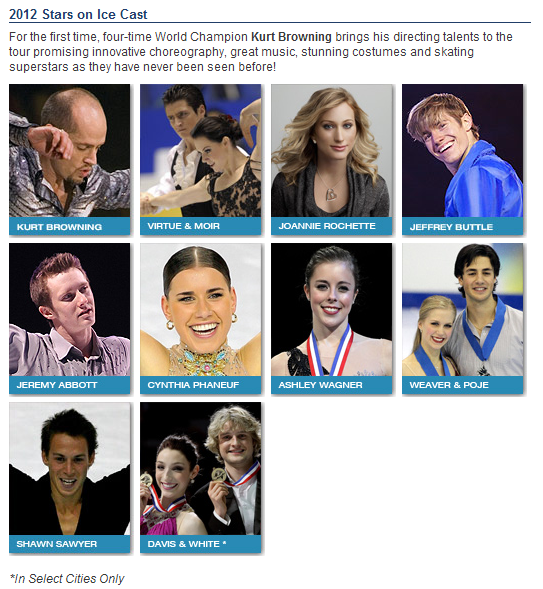 From the Official News Release:

Stars on Ice has always showcased the unique combination of athleticism and artistry which is figure skating, in a cutting edge premier entertainment spectacular. In 2010, Stars on Ice highlighted North American superiority in the Winter Olympics. Last year, Stars on Ice celebrated its third decade of shows in Canada by bringing the world an unparalleled cast of legends past, present, and future. In 2012, the Investors Group Stars on Ice “Love ‘n’ Life” Tour presented by Lindt will get a new infusion of creativity from legendary skater, Kurt Browning, who will co-direct and choreograph this year’s production.

“I am thrilled and a tad intimidated with the opportunity to choreograph Stars on Ice,” said Browning. “My relationship with this tour has been wonderful for over two decades, and I want to give this new role with the show my best effort like I did, and still will, as a skater.”

The Investors Group Stars on Ice Tour presented by Lindt will be made into a one-hour CBC television special to be aired in December. The performance at the Copps Coliseum in Hamilton, ON, on Thursday, May 3, will be recorded for the National broadcast. Visit www.starsonice.ca for more details on air date and time.

Stars on Ice, founded by Olympic Gold Medalist Scott Hamilton, is one of the premier touring entertainment events in the world. Tickets for the Investors Group Stars on Ice “Love ‘n’ Life” Tour presented by Lindt in Vancouver are on sale now. Special on-ice seating is available upon request. Group discounts are available for parties of 10 or more. Tickets start at $25 and are available via www.Ticketmaster.ca or charge by phone at 1-855-985-5000 and the Rogers Arena Box Office. Please visit www.starsonice.ca for more information as well as exciting show announcements.

About Investors Group Stars on Ice presented by Lindt

Founded in 1986 by skating icon and Olympic Gold Medalist Scott Hamilton, the Stars on Ice Tour originated in the United States. In 1991, Stars on Ice began to tour Canada and has now played more than 200 shows over two decades. Past tour performers include Kurt Browning, Jamie Salé & David Pelletier, Kristi Yamaguchi and Elvis Stojko. In its 22nd season, Investors Group Stars on Ice presented by Lindt will bring quality entertainment to twelve major Canadian markets this spring. Stars on Ice is produced by IMG, the world’s premier Sports, Entertainment and Media Company.

For all ticket information including group sales and CAA Member Promotions, please visit the Ticket Purchasing Section of the Stars on Ice Official Website.

I will see all the Stars on Ice in Vancouver, BC on May 18th, 2012. I will be sure to review the show again this year. Remember that Vancouver is the last stop on the tour this year so make sure to get your tickets while you can. Tickets are already on sale.